‘The Young and the Restless’ (Y&R) Spoilers: Sharon Confesses Miscarriage – Does Victor Know Gabe is Adam? 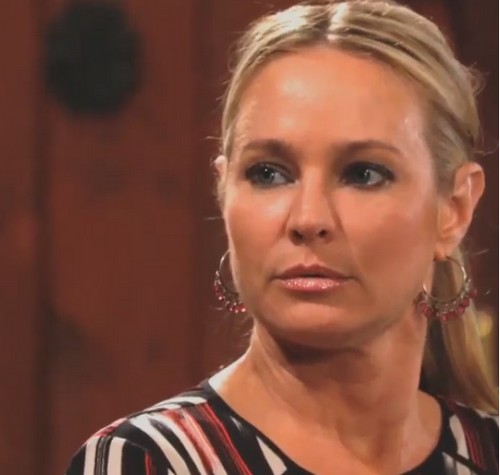 “The Young and the Restless” spoilers reveal that some deep, dark secrets could come back to haunt several Genoa City residents. Y&R viewers know that Adam (Justin Hartley) has been posing as Gabriel for months and only a handful of people know the truth. However, that could change if Adam goes through with his next plan. Chelsea (Melissa Claire Egan) has been trying to convince Adam to let go of his grudge against Victor (Eric Braeden) and move on with his life. For a while, it looked like Adam was almost willing to do it. Adam desperately wanted Chelsea to start a new life with him in Paris. Of course, Chelsea knew Adam would never be able to give up his desire for revenge and it appears she was right.

In the latest “Young and the Restless” promo video, Adam shouts that he hates Victor and he won’t let his father defeat him again. Unfortunately, Adam’s quest for vengeance could be his downfall. Adam can’t hold onto his secret forever and every interaction he has with Victor is just another opportunity to get caught. There’s even a chance that Victor already knows the truth. No one would be surprised if Victor had the upper hand on his son. Whatever the case, Adam’s secret will eventually come out and there will likely be extreme consequences.

Other “Young and the Restless” spoilers tease that Sharon (Sharon Case) will let someone in on a secret of her own. Mariah (Camryn Grimes) will learn that Sharon lost her baby. Naturally, Mariah will urge Sharon to be honest with Dylan (Steve Burton) about the situation. Dylan will walk in just in time to hear their chat about honesty and he’ll wonder if he needs updates on anything. The rumors hint that Sharon may decide to hold off on giving Dylan her miscarriage news for now.

Meanwhile, Devon (Bryton James) will find himself in hot water over Hilary’s (Mishael Morgan) disappearance. The police suspect Devon murdered Hilary and it’s going to be difficult to get out of this jam. Neil (Kristoff St. John) will also face some accusations from Colin (Tristan Rogers). If Neil didn’t have anything to do with the fact that Hilary’s missing, then he was certainly in the wrong place at the wrong time. Neil should have never gone to that island, but what’s done is done. It sounds like suspicions will continue to swirl over the next few weeks. Stick with the CBS soap to see how this mystery will be solved.

So Y&R fans, what do you think about Adam’s deep desire for revenge on Victor? Will Adam get in over his head, is he already? Will Sharon confess that she lost the baby or keep Dylan out of the loop for as long as possible? What really happened to Hilary and who might be involved? Let us know what you think in the comments below and don’t forget to check CDL often for the latest “Young and the Restless” spoilers, rumors, updates and news.

Deep Dark Secrets Video Promo from The Young and the Restless

Tune into #YR this week for some DEEP⚡️DARK⚡️SECRETS⚡️!