‘The Young and the Restless’ Spoilers: Sharon Framed for Austin’s Murder – Courtney Puzzled by Surveillance Footage 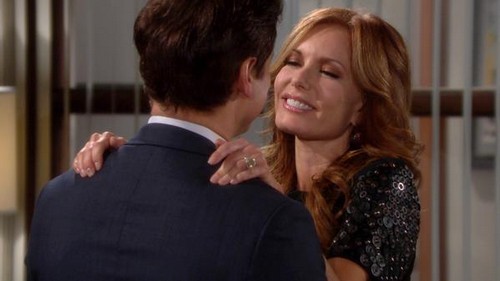 “The Young and the Restless” spoilers for Friday, April 3, hint that several twists and turns are ahead for the residents of Genoa City on the Y&R episode. Avery (Jessica Collins) will notice that Dylan (Steve Burton) didn’t come to bed last night and she’ll imply that he couldn’t sleep because he was bothered by her dinner with Joe (Scott Elrod). Dylan will snap back that he was concerned about something else and Avery would know that if Joe wasn’t always the topic of conversation.

Sharon (Sharon Case) will show up to talk to Dylan and Avery will excuse herself. It seems Sharon has remembered more about the night Austin (Matthew Atkinson) was killed. Sharon will say that she recalls pulling over on Old Post Road. A vehicle was driving from the direction of the cabin and it slowed down to watch. Sharon will indicate that she’s afraid someone might try to frame her for Austin’s murder.

Abby (Melissa Ordway) and Stitch (Sean Carrigan) will make plans to catch a plane so they can retrieve Kelly’s (Cady McClain) ashes. They’ll decide to go to Noah (Robert Adamson) and Courtney’s (Kelli Goss) wedding before leaving town. Meanwhile, Courtney will go to the police station to view the surveillance camera footage. After taking a look, Courtney will remark that it doesn’t make sense.

At the park, Nick (Joshua Morrow) will joke around with Noah before making a sweet speech. Kevin (Greg Rikaart) and Mariah (Caryn Grimes) will continue to wonder if Kyle (Lachlan Buchanan) or Sharon played a part in Austin’s murder. Summer (Hunter King) will gush to Noah about how Kyle has never let her down. When Stitch and Abby show up, Summer and Abby will be surprisingly civil to one another.

Noah will get a text from Courtney and he’ll tell everyone the news that she got caught at work. It looks like they’ll have to get married another day. Once he’s alone with the rest of the mystery crew, he’ll say that Courtney wants to meet them at the cabin. If Courtney was willing to miss her own wedding, she must have found something big. Stick with CDL for Y&R updates on what the gang will figure out.

Other “Young and the Restless” spoilers tease that Devon (Bryton James) and Lily (Christel Khalil) will try to help Neil (Kristoff St. John) with court preparations. Lily will insist on taking the stand to say that Neil’s a decent man. Devon will agree that it’s a good idea. Neil will make some sarcastic comments and urge Lily and Devon to leave. Leslie (Angell Conwell) will imply that Neil needs to cut Devon a break since he’s just trying to help, but Neil grumbles that the death of Christine’s (Laralee Bell) baby was his fault. Eventually, Neil will apologize to Lily and say that he intends on fighting the charges against him.

At Crimson Lights, Hilary (Mishael Morgan) will run into Winston Mobley (Ryan Caltagirone), the assistant district attorney. They’ll flirt a bit and Winston will ask Hilary out. Devon will show up as Winston is leaving and say that maybe he should warn him about getting involved with Hilary. The pair will argue and Devon will indicate that if the new guy is as dumb as he was, he deserves what’s coming to him. When Winston calls Hilary a little later, they’ll make dinner plans. The rumors say Hilary has something up her sleeve so stay tuned to CBS soap to see what she has in mind.