The Young and the Restless (Y&R) Spoilers: Victor Has Billy Arrested and Charged for Shooting Adam, Victoria Freaks? 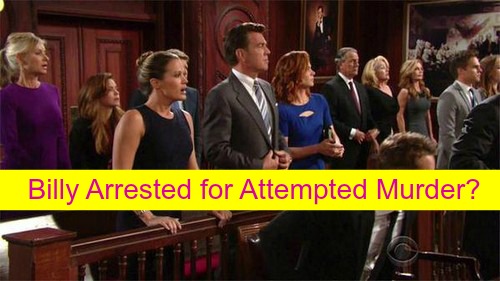 “The Young and the Restless” spoilers hint that Victor Newman (Eric Braeden) may be planning to blindside his daughter, Victoria (Amelia Heinle) by pressuring the police to press charges against Billy Abbott (Burgess Jenkins) for trying to kill Adam Newman (Justin Hartley) last year. Once Adam is found not guilty for Delia’s tragic death will Victor’s wrath reaches a boiling point?

Victoria becomes unhinged with the thought that her father was siding with Adam, again. Victoria and Nick Newman (Joshua Morrow) feel that Victor often takes Adam’s side over theirs. Victor isn’t playing sides but strongly feels that Billy should be punished for shooting his son over Delia’s death. Victor’s crusade for justice draws a line in the sand for Victoria, and this time she isn’t on her dad’s side.

Victoria knows in her heart that Billy shouldn’t have pulled the gun on Adam and shot him. She also feels that Adam’s refusal to come forward prompted him to take the law in his own hands. She tried to explain Billy’s feelings to her father, but he wasn’t interested in hearing it. In Victor’s mind, Billy is a murderer for trying to kill Adam. Not to mention how much The Moustache hates Billy for taking advantage of Newman Enterprises during the Paragon attack.

In Victor’s eyes, Billy cost him time with Adam and Connor. Victor tolerates many things, but time away from his children and grandchild is not one of them. Let’s face it; Victor was never Billy’s biggest fan; however, this prompted Victor to go to the police to arrest Billy – and press charges.

Adam told his father not to bother with involving the police. He explains they should be grateful he didn’t succeed and move forward. The truth is Adam has done many shady things, and he may feel like Billy’s actions against him were a dose of karma. Victor refused to let the sleeping dog lie, and goes to the police for their help in delivering justice.

Before going to the police, Victoria tells her dad that he is choosing the wrong side. She tried the explain to him that Billy is a good guy, even if he doesn’t see eye-to-eye with him. She explains that Adam was planning on taking his company from him and had a HUGE revenge plan to swindle him. Victor believes that is behind them, and tells Victoria to choose – either she stands with the Newman’s or Billy. “It’s up to you,” Victor says sternly.

It’s anyone’s guess what happens next. Victoria typically stands by Billy’s side even if it compromises her relationship with her family. After some time, they usually forgive her. Will Victor ask the police to arrest Billy for attempted murder? Don’t forget to come back later for more juicy “The Young and the Restless” spoilers, news and updates!