‘The Young and the Restless’ Spoilers: Y&R Baby Drama – Is Chelsea Pregnant By Billy or Gabriel – Wedding Plans Go Awry? 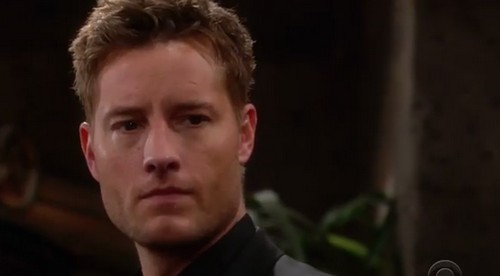 “The Young and the Restless” spoilers tease that Chelsea (Melissa Claire Egan) will continue to fight her feelings for Gabriel (Justin Hartley), who we know is actually Adam. However, it seems Chelsea could get news that will nudge her into Gabriel’s arms. Y&R rumors are hinting that Chelsea may end up pregnant. Given that Billy and Chelsea are scheduled to be married Friday, May 1, this news could change things, to say the least. If Chelsea learns she is expecting a child before the wedding, it would completely blow up her current love triangle with Gabe and Billy (Burgess Jenkins). Naturally, the first question on everyone’s mind would be: who’s the father?

Any Chelsea pregnancy news has potential to throw her wedding plans into confusion if she learns it before she is married. But if Billy and Chelsea wed and then learn she is pregnant with Gabe’s child all hell is certain to break loose. Remember – Chelsea and Gabriel made love and it only takes one night to get pregnant, especially on soaps!

If Chelsea is pregnant with Gabriel’s child, Chelsea will finally have a reason to ditch Billy and go after what she truly wants. The chemistry between Chelsea and Gabe is undeniable, but she still feels the need to honor her commitment to Billy. A child with Gabriel would give Chelsea an easy out and Billy would be free to pursue Victoria who badly needs pursuing now that Stitch (Sean Carrigan) is with Abby (Melissa Ordway). A new baby for Gabriel and Chelsea sounds like the perfect scenario for everyone—until you consider that Gabe is really Adam. Should Chelsea find out Gabriel’s true identity, she could push him away and Adam would be back where he started.

There’s also the possibility that Chelsea could be pregnant by Billy. That would give Chelsea yet another reason to stay with the status quo and get married. Chelsea could have something electric with Gabriel, but she’s choosing to settle for Mr. Ho Hum. A baby with Billy might make Chelsea stand by her man and force Gabe even further out of her life. Somehow we don’t see this as a likely longer term choice by TPTB at Y&R.

Of course, things could be turned upside down again if the writers decide to pull a paternity test switch. That kind of stunt is expected on soaps. Ultimately, we don’t know for sure what a pregnancy would mean for Chelsea, but we do know it would mean some juicy fun for Y&R viewers. Stick with CDL for updates as we wait on the rumors to become confirmed “Young and the Restless” spoilers.

So Y&R fans, what do you think about the Chelsea pregnancy buzz? Do you feel that would be a good storyline, especially in conjunction with news that Billy and Chelsea are scheduled for a wedding on Friday, May 1? Would you want Adam or Billy to be the baby’s father? Would the news of a child push the rivalry between Adam and Billy over the edge into all out war? Let us know what you think in the comments below and don’t forget to check CDL tomorrow for the latest “Young and the Restless” spoilers, rumors, updates and news.