‘The Young and the Restless’ Spoilers: Billy and Chelsea’s Wedding Arrives – Victor’s Investigation of Gabriel Backfires 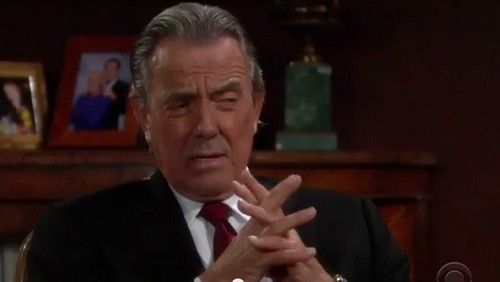 “The Young and the Restless” spoilers for the week of April 27 – May 1 tease some exciting must-see drama in Genoa City, and according to Y&R rumors fans of the CBS soap will want to tune in to every single action-packed episode. It’s impossible to carry on a normal relationship on “The Young and the Restless,” and according to Y&R spoilers during the week of April 27, there will be some shocking developments in the romance department.

“The Young and the Restless” spoilers tease that during the week of April 27 the residents of Genoa City will be preparing for Billy (Burgess Jenkins) and Chelsea’s big wedding day, which is set to air on Friday. While Chelsea (Melissa Claire Egan) and Billy are preparing to say “I Do,” relationships are crashing and burning all around them. According to Y&R spoilers Avery and Dylan will have a major blow-up over her relationship with Joe Clark (Scott Elrod), and it will send him straight into the consoling arms of Sharon Newman. While Dylan is confiding in Sharon about his romantic woes, another relationship will be taking a turn for the worse, Michael (Christian LeBlanc) and Lauren (Tracy Bergman).

“The Young and the Restless” spoilers have been teasing for a while that Michael Baldwin will be killed off the CBS soap, and during the week of April 27 his health takes another turn for the worse after he collapses and is rushed to the hospital. In an interesting turn of events, Michael breaks up with his doting wife Lauren while she attempts to take care of him while he struggles with his cancer. A popular theory among Y&R fans is that Michael Baldwin is pushing his wife Lauren Fenmore away because he knows his days are numbered and doesn’t want her to be hurt when he passes away – and that is beginning to come to fruition.

Spoilers for “The Young and the Restless” also tease that during the week of April 27 fans can expect to see Kyle Abbott continue to woo Summer Newman, and Hilary (Mishael Morgan) continues to try to win back Devon (Bryton James) with increasing success. Also, during the upcoming week, Phyllis (Gina Tognoni) will seriously question Fake Jack’s (Peter Bergman) sudden trust in Victor, meanwhile Victor (Eric Braeden) launches a full-blow investigation into Gabriel (Justin Hartley) and is determined to figure out what he is hiding. Victor best be careful about initiating investigations these days lest The Mustache be hoisted by his own petard!

So, Y&R fans, are you as excited as we are for all of the upcoming drama? Is this really the end of Dylan (Steve Burton) and Avery? Will he hook up with Sharon (Sharon Case)? What about Michael and Lauren, is their marriage really over, is Michael dying? Will Chelsea and Billy’s wedding day go off without a hitch – is that even a remote possibility? Let us know what you think in the comments below and don’t forget to check CDL tomorrow for more “The Young and the Restless” spoilers and news.