‘The Young and the Restless’ Spoilers: Did Sage Kill Billy Abbott’s Daughter Delia In Hit And Run – Adam Newman Innocent? 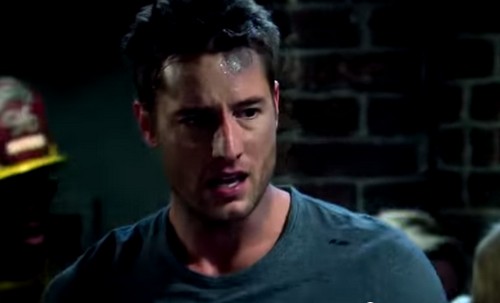 “The Young and the Restless” spoilers and news tease that there could be a shocking revelation coming up regarding the death of Billy Abbott’s daughter Delia. In 2013 Delia was killed by a hit-and-run driver, believed to be Adam Newman. However, there were some major holes in the storyline that were never really addressed, which left Y&R fans certain that Adam Newman wasn’t actually the driver on the dark road that night that took Delia’s life and kept driving, never looking back.

“The Young and the Restless” fans have not forgotten that the night that Delia was killed, aside from Adam Newman there was another woman driving down the road – with blond hair. And rumor has it that woman was Gabriel/Adam Newman’s wife Sage, and she is actually the driver that killed Billy Abbott’s daughter Delia. When Sage first arrived in Genoa City, Chelsea ran in to her at Delia’s memorial – and Sage gave her a flighty explanation, which spurred Y&R fans in to believing she may have visited the road side to pay her respects since she was actually the young girl’s killer.

As if the fact that Sage has an uncanny resemblance to the woman driving down the road the night that Delia was killed, and felt the need to visit her memorial on the side of the road isn’t evidence enough – Sage dropped a peculiar bomb on Billy Abbott this week on the CBS soap. Sage confessed to Billy Abbott that she can’t have children, and acted especially strange around Chelsea’s son Connor, strange enough to make Billy think that they shouldn’t allow her around Connor anymore. Sage’s bizarre behavior only further fueled theories that she may actually be Delia’s killer.

Soap operas have a tendency of coming full circle with their storylines. In a sick and twisted Y&R world, it makes total sense that Sage is actually Delia’s killer and not Adam Newman. What are the odds that Adam Newman would have to fake his death and go in to hiding, and wind up married to the woman who actually committed the crime that he is being blamed for? In real life, the odds are slim to none, in soap opera world – they are very likely.

So, Y&R fans, do you think that Adam Newman is innocent? Could Sage actually be the hit-and-run driver that killed Delia that night? Does that explain her bizarre behavior around children and why she visited Delia’s memorial? Let us know what you think in the comments below and don’t forget to check CDL tomorrow for more “The Young and the Restless” spoilers and news.