‘The Young and the Restless’ Spoilers: Gabriel Struggles to Keep Adam Newman Secret – Abby or Sharon Learns The Truth? 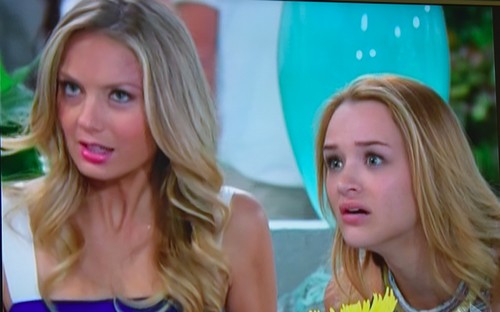 “The Young and the Restless” spoilers reveal that Gabriel (Justin Hartley) will struggle to keep his secret in the coming weeks. Several people are already in on the news that Gabe is really Adam. So far we have Sage, (Kelly Sullivan), Jack (Peter Bergman), Marisa (Sofia Pernas) and Chelsea (Melissa Claire Egan). “The Young and the Restless” tends to stagger the big reveals, which means we’ll likely see at least another character or two learn the truth before everyone else does. The question is: who will join Gabe’s secret club? There are a few good possibilities.

First, we have Abby (Melissa Ordway). Gabriel’s decision to make Abby COO was probably a ploy to stir up trouble, but Abby took the opportunity she was given. The way Abby sees it, Gabe had faith in her when no one else did. We also saw Gabriel visit Abby in the hospital and reassure her that she’s on the right track in her new position. Abby is constantly bringing up the fact that Gabe has her back and she may get the chance to return the favor. Since Abby and Gabriel seem to have developed a friendship recently, it’s not a stretch to think she’d keep his secret. If Abby isn’t willing to do it out of the kindness of her heart, she might be willing to do it just to gain the upper hand over naysayers like Victoria (Amelia Heinle) and Billy (Burgess Jenkins).

Speaking of Billy, he definitely knows something’s up with Gabriel and he’s on a mission to get to the bottom of things. However, it’s tough to believe Billy would stay quiet if he learned Gabe’s true identity. When it comes down to it, Billy would likely be willing to go to prison for shooting Adam as long as Delia’s (Sophie Pollono) alleged killer was brought to justice. That’s why “The Young and the Restless” writers will probably keep Billy out of the loop for a while longer. The same goes for Nick (Joshua Morrow) and especially Victor (Eric Braeden). We have to save the big payoff for the dramatic conclusion of this storyline.

Though the crucial players in this scenario may stay in the dark for the time being, someone like Sharon (Sharon Case) could get a clue. That could create a bit of a dilemma for Adam. Sharon has already shown signs of instability now that she’s off her meds. Plus, Y&R rumors hint that Sharon will soon have a miscarriage and it will totally send her off the deep end. Who’s to say she wouldn’t blackmail Adam into helping her steal Sage’s baby? After all, Adam owes Sharon one since he stole Faith (Aly Lind) when she was an infant. On the other hand, the last thing Adam needs to do is add to his list of crimes. On a good day, Sharon is actually quite caring. Maybe Sharon would understand Adam’s situation and become a member of the secret society he’s apparently putting together.

Whatever the case, someone’s bound to join the fun. Perhaps Chelsea or Sage will slip up and call Gabriel by his real name while another character eavesdrops nearby. Chelsea particularly loves shouting “Adam” every chance she gets. If nothing else, little Connor (Michael and Nolan Webb) will start repeating it before long. “Peanut” could blow this whole thing wide open if they’re not careful. Stick with the CBS soap to see who will get updates on Gabriel’s true identity next.

So Y&R fans, what do you think about Gabriel’s spreading secret? Will Abby or Sharon learn the truth? Will Victor be the last to know? Voice your opinion in the comments below and don’t forget to check CDL tomorrow for the latest “Young and the Restless” spoilers, rumors, updates and news.