The Young and the Restless Spoilers: Is Marco Avery’s Masked Rapist – Jack and Adam Entrap Victor 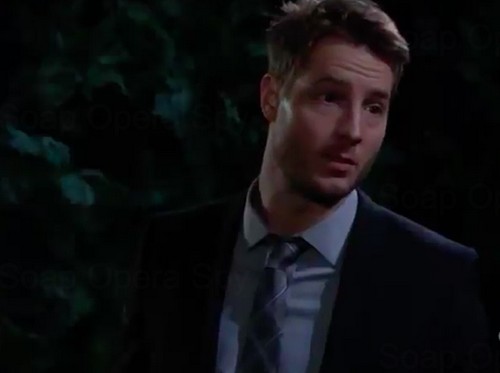 The Young and the Restless spoilers explore the rumors that Marco is Avery’s rapist. On the June 29 Y&R episode Victor [Eric Braeden] shoots Jack… and Adam [Justin Hartley] witnesses it – all part of Marco’s [Peter Bergman] plan to set Victor up for real Jack’s murder. But the problem is real Jack came back unexpectedly and got caught in the crossfire.

Real Jack showed up to the park to warn Victor that he was in danger, Jack was not armed but Victor thought is was Marco pulling a gun. In fact Real Jack had just taken his hand out of his pocket but Victor blew him away standing there like a true sociopath leaving Jack bleeding profusely. From out of nowhere Adam arrives acting shocked – “What have you done Victor?” Meanwhile as real Jack is laying on the ground bleeding to death Gabe makes a deal with the devil agreeing to stay silent about what he has witnessed in exchange for Newman Jabot. Victor hesitates but eventually agrees.

We all know Victor will not give up his business, not even to cover up murder. Victor leaves and Marco shows up to meet Adam but he is late… where was he? We will get back to that soon but we can tell you that it was nowhere nice.

This week’s The Young and the Restless spoilers reveal that real Jack comes out of his coma and he and Gabe/Adam work together against the bad guy  Victor. Gabe tells Jack everything he knows about what Victor has done and Jack is mad as hell. Adam and Jack devise a plan to trick Victor into telling them everything he has done to real Jack as they correctly decide they’ll need proof if they are going to trap Victor in his twisted plot to ruin Jack’s life.

Sources say Gabe sets up a meeting with Victor and real Jack although Victor still thinks Jack is dead and he is meeting with Marco! Gabe and Jack are going to try get Victor to admit he brought Marco Anicelli in to impersonate Jack Abbott as it is the only way Jack thinks he can prove what Victor has done. Meanwhile Marco Anicelli thinks that Jack has died and he is home free and will be off to the Carribbean drinking rum and coke soon. The problem is that Jack is alive and has ruined Marco’s plans.

Sources say we are going to see two Jacks in Genoa City and it may even become confusing at times for EVERYONE involved, even Adam. The walls are closing in on Marco and desperate men do desperate things. What else has Marco done? Dylan [Steve Burton], Kevin [Gregg Rikaart] and Noah [Robert Adamson] are looking at video footage trying to find out who was in Chancellor park the night Avery [Jessica Collins] was attacked and raped – they see some disturbing footage of Jack going to the park and then 4 minutes later Jack is arriving to the park again…how can that be?

The only people the video footage shows were in the park that night besides Avery and Joe where Jack Abbott, Victor Newman and Gabe Bingham (and ANOTHER Jack Abbott = Marco of course, but no one has put that together yet). Who followed Avery home? The only person who fits the statuesque build of Joe Clark [Scott Elrod] on that list is Gabriel Bingham – will fingers start pointing at Gabe? Where had Marco Anicelli been and what was he up to that could have made him late to the meeting with Adam and Victor?

We all know what a satyr Marco is and how prone to cruelty and violence the vicious drug lord can be – just recently we saw him raising his hand to Kyle, smacking him on the head and having to contain himself from doing worse damage. Marco grabbed Phyllis by the wrists so hard that Phyllis was actually scared. We have seen Marco order murders.

Was Marco Anicelli the masked man who brutally raped and beat Avery at her home taking out his frustrations? Y&R sources say there are lots of twists in turns in the coming weeks so do not miss an episode of CBS’s Young and The Restless! What do you think CDL’ers – did Marco rape Avery? Will Gabe and Jack get the truth out of Victor, bringing him down, or will they plan open a Pandora’s box in Adam’s world?