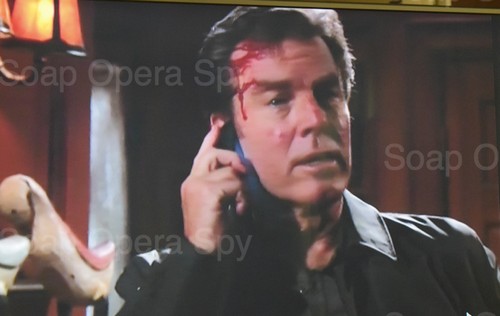 The Young and the Restless spoilers explore Marco and his relationship with the Cabin Killer Murders as well as other hot rumors and updates. Y&R has been beating around the Cabin Killer bush for 6 months now. I guess it took them this long to finally figure out who would be the murderer and who would be following Fen Baldwin’s (Max Ehrich) bad grades in school. Remember Marco blackmailed Fen into spiking the Scooby Doo gang’s punch then the alleged “murder”of Austin (Matthew Atkinson) happened. Yes ladies and gentlemen they are making Marco the Cabin Killer big surprise right?

Well supposedly the twist is he has an accomplice so the question will be who is it? Marco was working for Victor in February – he was seen on some surveillance footage with Victor Newman (Eric Braeden) in Chancellor Park by Noah’s (Robert Adamson) fiance Courtney (Kelly Gross), a rookie cop who found the tape and was watching it when she was murdered at the cop shop. Marco was desperate to keep his little rendezvous with Victor a secret – Marco was not giving up his cushy Jack Abbott life for anyone.

Marco ends up of all places at the Abbott Cabin on the Aug 5 Y&R episode and that right there is a clue that he will be tied to the Cabin Killer as he is talking to an accomplice. Spoilers indicate that the Cabin Killer will be exposed this week BUT there will be a twist – could the twist be his accomplice is Austin and that Marco helped him fake his own death just as Marco helped Victor with the faked death of Kelly Andrews (Cady McClain)? The writers are all over the place with this painfully long boring Cabin Killer story – put a fork in it already!! Why would they bring back Austin from the dead only to link him to the killer? Maybe Austin didn’t know Marco was a killer, maybe he only thinks he’s just a guy who looks exactly like Jack Abbott. Now that TPTB have figured out who they want to pin Courtney’s murder on maybe now the story will get some traction to bring it to an end.

They have now tied American Apple Pie Noah Newman (Robert Adamson) into this drug lord story by hooking him up with drug lord Marco’s ex girlfriend, sex kitten Marisa Sierras (Sophia Pernas). Marisa and Noah Newman are an official item but Noah still speaks of his fiance Courtney and Marisa tells him how sorry she is. Of course they HAD to make Marco the killer so that it would affect Noah’s new storyline. Noah met Marisa a month ago and now is involved with a woman who was involved with the man who murdered Courtney (Kelly Gross). Would that give Noah Newman some air time? Absolutely.

Now Noah claims he is in love with Marisa so that will add more heartache and misery to the storyline when Noah finds out that his new love was sleeping with Courtney’s murderer – what will that do to them? Well considering they only met a month ago CDL does not foresee the Noah/Marisa fan club rioting. Marisa is a master liar and the secret about her working with Noah’s grandpa will be huge. Will Noah forgive her because she has seduced & mesmerized him? Whatever the fall out, Noah has a storyline and that seems to be the whole point. Let’s hope after finding out officially that Marco is the killer we won’t have to wait ANOTHER 6 months to know who is accomplice is. Stay with us for more up to date Young and the Restless spoilers and news. What do you think about Noah and Marisa hooking up CDL’ers? Please leave your thoughts and comments in the comments below.