‘The Young and the Restless’ Spoilers: Jack’s Plan to Crush Victor, Adam Plays Along – Nick Confronts Gabriel on Sage Paternity 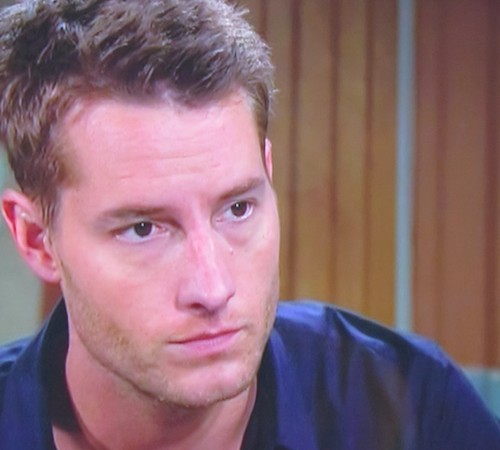 “The Young and the Restless” spoilers for Friday, July 24, tease that Paul (Doug Davidson) will ask Jack (Peter Bergman) some questions about what happened the night Victor (Eric Braeden) shot him in the park. Paul will explain that Gabriel (Justin Hartley) said Jack was unarmed. Jack will say that he had a gun and he was going to put it down. Victor felt threatened when Jack reached in his pocket and he fired a shot. Paul will press Jack for more information, but Jack will say he’s tired and needs to rest.

After Paul exits, Adam (Justin Hartley) will come in to clear up some confusion. Jack will rip into Adam for making a deal with two devils. Adam will argue that he didn’t know about Marco (Peter Bergman) until the day Jack was shot. They’ll bicker a bit more and Adam will wonder why Jack is letting Victor get away with all of this. Jack will say that he isn’t, but he wants to make sure Victor doesn’t see it coming. Jack will insist that Adam has to play along or he’ll reveal the truth about his identity.

At the police station, Gabriel will try to do damage control on his story. Gabe will admit that he didn’t see Jack with a gun, but he still could’ve been armed. Paul will mention the gun found at Chelsea’s (Melissa Claire Egan) place. Gabriel will acknowledge that he’s made some mistakes. Once they’re alone, Paul will tell Christine (Laralee Bell) that he thinks Victor has dirt on Gabriel. There’s sure to be more fallout on the way.

Back at the hospital, Phyllis (Gina Tognoni) will be confused about the number two that Jack wrote. Jack will say he remembers Phyllis talking to him, but he doesn’t remember the hand squeezes or what he wrote down. Jack will try to get Phyllis to drop the idea by saying he’s just happy to be alive with her.
Victoria (Amelia Heinle) and Abby (Melissa Ordway) will quarrel at Newman-Abbott. Victor will walk in and indicate that he thinks Abby deserves a chance as COO. Victoria will tell Abby to watch out for her mother. Ashley (Eileen Davidson) could be gunning for Abby’s job and she doesn’t like the fact that Abby is dating Stitch (Sean Carrigan). Abby will imply that the pot is calling the kettle black.

Nikki (Melody Scott Thomas) will feel guilty about doubting Victor, but Neil (Kristoff St. John) will believe that she did the right thing by standing up to him. Over at the athletic club, Ashley will share the news that Jack is backing up Victor’s story. Victor will be pleased by Ashley’s updates and he’ll declare that everything will soon get back to normal at the company. Ashley won’t be so sure about that.

Other “Young and the Restless” spoilers say that Sage (Kelly Sullivan) will get the results of the paternity test. When Nick (Joshua Morrow) shows up, Sage will tuck the envelope out of sight at The Underground. Later, Nick will discover the envelope and he’ll seem shocked by the findings. Sage will return and Nick will ask her when she was going to tell him. Sage will say that she only slept with Gabriel once and she knows in her heart that this miracle baby is Nick’s. Nick will hand Sage the envelope and tell her to see for herself. As Nick heads out, Sage will break down in tears while reading the results.

Nick will spot Gabriel at the athletic club and shout that he knows Gabe slept with Sage. Nick will add that the DNA test proved the baby is his and Gabriel needs to stay away. From Sage’s reaction it appears Gabriel is the child’s father, but Nick seems to be covering up the truth. Y&R rumors hint that we’re in for some bombshell reveals down the road. Eventually, Nick will find out that Gabriel is really Adam and Adam will likely learn that Nick lied about the baby’s paternity. Stick with the CBS soap to see just how bad things will get for these two brothers.