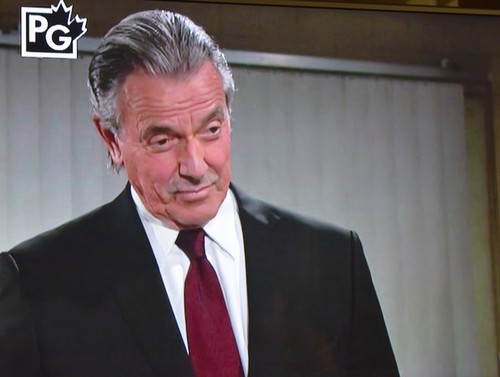 “The Young and the Restless” spoilers for Thursday, July 23, tease that Jack (Peter Bergman) and Victor (Eric Braeden) will get into a heated dispute. Jack will insist that he’s the one in control of the situation now and Victor is going to pay the price for his actions. Victor will say he thought he was shooting Marco (Peter Bergman) in the park that night and it was indeed in self-defense.

Jack will try to argue, but Victor will suggest that Jack might want to think twice before bringing everything out into the open. After all, Jack supposedly killed Kelly (Cady McClain) and blew up the cargo ship. Victor will let Jack know that Marco is dead. Jack will reply that Gabriel (Justin Hartley) still knows about the impostor. 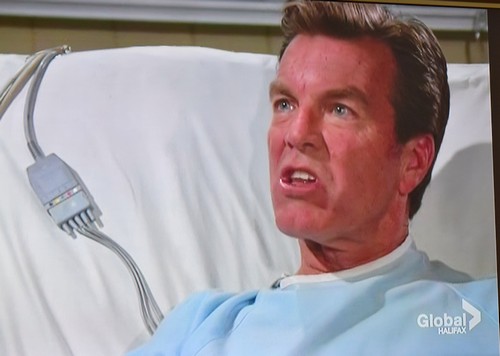 At the hospital, Gabriel will show up to see Abby (Melissa Ordway). Abby will be concerned about the recent deal she made, but Gabe will say it wasn’t so bad. Gabriel will add that he has faith in Abby. Gabe will say he wants to stop by Jack’s room, but Stitch (Sean Carrigan) will tell him Jack needs to rest. Chelsea (Melissa Claire Egan) will give Gabriel a call and urge him to come home right away. After Gabe is gone, Abby will ask Stitch if Ashley (Eileen Davidson) told him to turn down Jack’s visitors. Stitch will insist that Ashley is his friend and she isn’t pressuring him. Stitch will head to Jack’s room and Jack will ask him for another favor.

When Adam (Justin Hartley) arrives at Chelsea’s place, she’ll let him know that she overheard Phyllis (Gina Tognoni) and Billy (Burgess Jenkins) talking. They’re planning to do another DNA test to prove Gabriel isn’t Jack’s son. Chelsea will say Adam can’t let his desire to bring down Victor cloud his judgment. If he doesn’t resign, Adam could lose Connor (Michael and Nolan Webb).

Gabriel will go to Newman-Abbott to inform Billy and Phyllis that he’s resigning as CEO. They’ll wonder what’s up. Billy will say Jack told them Gabriel wasn’t really an Abbott. Gabe will be happy that Jack’s been talking to them and he’ll confess that it was a plan they cooked up to gain the upper hand on Victor. Later, Gabriel will warn Victor that Jack will tell the truth about what happened in the park. Victor will indicate that he’s sure Jack will set the record straight.

Stitch will call Phyllis and Billy to give them the news that Jack is awake. They’ll rush back to the hospital and share some hugs with Jack. Kyle (Lachlan Buchanan), Summer (Hunter King), Stitch and Abby will join them in Jack’s room. As they all gather around, Jack will reveal that Victor shot him in self-defense.

Other “Young and the Restless” spoilers tease that Marisa (Sofia Pernas) will come clean about Marco. Marisa will tell Noah (Robert Adamson) that she wasn’t in Genoa City when the cabin killings occurred, but Marco was definitely around. However, Marisa was in the car with Marco when they went into the lake. Marco never came up out of the water. Noah will want to tell the cops, but Marisa will beg him to keep quiet. Noah will make Marisa promise to stay in town until they can get this mess sorted out.

Noah will give the rest of the gang updates on everything Marisa told him. Kevin (Greg Rikaart) will want to tell Paul (Doug Davidson) so they can put all of this behind them. Noah will argue that Marisa’s life could be at stake. Besides, the killer is gone and they’re not in danger anymore. In a moment alone, Kevin will tell Mariah (Camryn Grimes) that they’re going for a swim in the lake tomorrow.

In Marisa’s room at the athletic club, Noah will tell her not to worry and thank her for sticking around. They’ll share a few kisses, but Marisa will pull away. Marisa will hint that she doesn’t want to rush anything or ruin their friendship. Y&R rumors say that the fireworks will continue for Noah and Marisa. Stick with the CBS soap to see what their future holds.

Watch The Young and the Restless video preview for Friday July 24 Right Here!