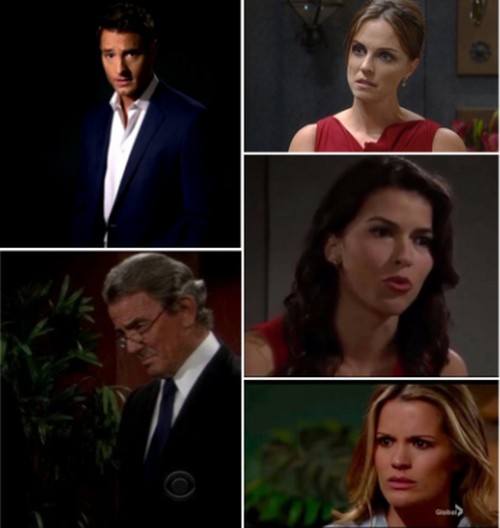 The Young and the Restless spoilers look at who is involved in the deceit rampant on current Y&R storylines and the fallout expected as the lies are exposed. Oh what a tangled web we weave, when first we practice to deceive! Did Sir Walter Scott have Genoa City in mind when he wrote that very popular quote? Not so much, but the residents of Genoa City are definitely living up to those famous words.

We begin with Victor Newman [Eric Braeden] who brought in drug lord Marco Anicelli [Peter Bergman] who is an evil doppelganger to long time frenemy business rival Jack Abbott [Peter Bergman]. Victor hired Anicelli in Feb of this year and he has been wreaking havoc since. The only person who knows of this alliance is Marco and Marisa [Sophia Pernas], Marco’s ex lover. When the truth comes out about what Victor has done he could be put away for life and lose his family – no one will want to be associated with Victor – The Moustache will not be able to lie his way out if this one… or will he?

When Adam Newman [Justin Hartley] came to town as Gabriel Bingham the first stop he made was to old buddy Jack Abbott’s house. Adam revealed himself in record time and has been working with Jack the whole time – of course Jack did not agree to deceive everyone on his own. Adam had to blackmail him holding brother Billy [Burgess Jenkins] shooting him over Jack’s head. Still nonetheless Jack has kept this dirty secret that could affect many of his loved ones starting with Billy, considering Billy thinks Adam was responsible for killing daughter Delia. How will brother Billy react when he finds out Jack has been protecting Adam’s identity all of this time? On Monday July 20 show Jack comes out of his coma but he does not want anyone to know so he enlists the help of Dr. Stitch Rayburn bringing Stitch into the “Liars Club.”

When Phyllis finds out Jack has been faking his coma and he knew about Adam/Gabe how will she react – we know how sister Avery [Jessica Collins] reacted when she found out Joe Clark [Scott Elrod] was faking his paralysis… will Phyllis snap too? Now that Jack has brought Stitch into the web of lies will he find himself in the dog house with both Ashley [Eileen Davidson] and Abby [Melissa Ordway]?

Adam Newman is the master secret keeper – he kept the fact that he thought he ran over Delia [Sophie Pollono] for a year before it was finally revealed, the revealing of the evidence against Adam is what led to the uber lie he is living now. Billy held Adam at gunpoint when it was revealed that it was “allegedly”Adams’s SUV that ran over Delia – Billy shot Adam while he held him hostage in the car and the car crashed and went up in flames hence Adam’s new face and identity.

Adam’s secret identity was finally revealed on the July 13 episode by his own admission to wife Chelsea [Melissa Claire Egan] but now Chelsea is keeping the uber lie going. Adam has yet to tell Chelsea the tale of the two Jacks but that is coming soon. Adam has just been set up by Victor with a gun that is supposedly Jack’s and Chelsea demands answers – will Adam tell the truth about two Jacks or keep the lie going? Chelsea Newman has just got back into the good graces of GC residents when out it comes that she helped cover for Gabriel/Adam – all of that hard work proving she had changed and that she was not a con anymore will be null and void.

Sage Warner [Kelly Sullivan] is another huge web weaver she was the mastermind behind Adam’s new face and new identity. Sage has seemed to be a bit of a bully to Adam but it looks like the tide has turned and her dirty secret is very close to being revealed. She has EVERYTHING to lose considering Nicholas Newman [Joshua Newman] thinks she is such an honest upstanding lady – what will this do to Nicholas when he finds out his “girlfriend’ is as bad as his dad whom he despises? Sage is also pregnant right now with another little lie – who’s the daddy? She is making Nicholas believe it is his child when it may be the brother’s Nicholas hates so much. What other lies is Sage keeping? Oh the tangled webs she has weaved… How will self righteous Nick Newman react to all of Sage’s lies? He will be taking hit after hit so which lie will be the final straw? Will Sage have one more HUGE revelation that will blow everyone out of the water? Sources say yes and it will make her the town pariah – move over Victor!

Marisa Sierras is the new lie keeper in town. Marco told her EVERYTHING about Victor’s tales of the two Jacks. She thinks she killed Marco and has ended up in the arms of mild mannered rich boy Noah Newman [Robert Adamson]. Noah has made it perfectly clear that he does not like dishonesty yet Marisa continues to keep the identity of her “boyfriend,” druglord Marco Anicelli a secret from him.

Marisa showed up at Jack’s hospital room trying to talk to him but got caught by Phyllis [Gina Tognoni]. Noah asks her what she was up to ending up in Jack’s hospital – did she know Jack? She lies telling him she got lost. Marisa and Sage have now seemed to form an alliance when Marisa intercepted a tell-all letter meant for Nicholas. Sage and Marisa meet in the park and Marisa told her no one knows the truth your secret is safe with me…. hmmm which lie would that be Marisa, Sage is keeping so many?

The question is which lie will be the catalyst for the domino effect causing relationship after relationship to blow up? TPTB are pushing Noah and Marisa together pretty fast considering he just lost his fiance Courtney but then if we compare it to Summer’s 5 minutes of mourning over Austin Noah’s has been respectable. Marisa and Noah seem to be really liking each other so will Noah overlook the fact that she is the ex girlfriend of an FBI’s most wanted druglord and that she knew that Victor, Noah’s Grandfather was the mastermind behind the horrible evil doppelganger scheme? Noah is going to flip out when he finds out she knew all of this information that concerned his family and I guarantee he will show a side we have never seen before.

With all of these lies the town of Genoa City will definitely be divided worse than ever. The big question will be which lie will be the catalyst of the domino effect to come. Stay tuned to CBS’s Y&R and watch the web of lies come undone. Please leave your thoughts and comments in the CDL comments below.