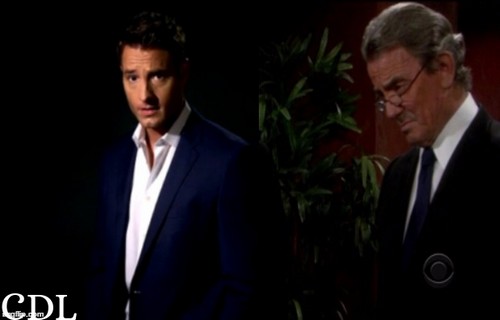 The Young and the Restless spoilers report that Adam Newman is taking after his dad Victor and returning to his sociopathic ways. After a fairly brief grace period as Gabriel Bingham our Y&R anti-hero is apparently slipping back to his dark side. Victor Adam Newman Jr [Justin Hartley], his mother called him “Vic,” was raised in Kansas City with his blind mother Hope Wilson [Signey Coleman]. He graduated Harvard Business School on his own brilliant self-determination and grit. On Hope’s death bed she decided to tell Vic who his father really was – the powerful magnate Victor Newman [Eric Braeden].

Vic was not impressed and as a matter of fact he had a lot of resentment for Victor abandoning him as a baby. Victor Newman on the other hand wanted nothing more than to get to know his newly discovered son. Victor insisted Adam come to Genoa City and work for him at Newman Enterprises.

This father-son pairing proves the apple does not fall far from the tree – even if the apple is not grown on the fatherly tree! Vic started using his given name Adam and lived up to the name right out of the gate. Siblings Victoria [Amelia Heinle] & Nicholas [Joshua Morrow] resented him right away, blaming Adam’s mother Hope for the break-up of their parents’ marriage. Victor tried to make Adam feel like one of the family but Adam always felt like an outcast bastard child. Adam always feeling like Victor and his siblings treated him differently and always felt like he could never live up to Victor’s standards. I know, I know Victor has standards? Adam has proven himself to be more ruthless and cunning at times than even Victor.

Have we all forgotten what Adam was capable of? What Adam is doing now with his father’s company is not much different than when he took advantage of his dad before. Victor was trying to prove his trust to Adam by leaving him in charge of Newman Enterprises while he went to Mexico to search for the men who murdered his girlfriend Sabrina Costelana [Raya Meddine]. Time goes by and Victor is presumed dead. The Newman kids find out Victor has left the majority of his estate to Adam! The first thing on Adam’s list was to fire his siblings. Sound familiar?

Well this time Adam did not fire BUT demoted them and is gloating once again in his glory of “winning.” Adam then plots to frame Jack Abbott [Peter Bergman] for the murder of Victor but when Victor appears alive Jack reverses the plot and Adam is framed for murder instead. Adam goes directly to prison with no get out of jail free card. Adam was definitely not an inmate favorite as he did not do prison well – the inmates brutally beat him and when Victor found out he dropped the charges against his son but the rift would always be there.

Here we are 2015 as Victor plotted to set Jack Abbott up just as his son did years ago. Adam is at the helm of Newman Enterprises again and the only difference this time is Jack Abbott is not his mortal enemy but his best friend. The parallel of father and son is undeniable. The rotten deeds Adam & Victor have committed over the years are immeasurable but Adam wins in the evil department hands down. His character has been described as “one of the most devious characters on daytime” by The Advocate. Adam Newman is a very dark sociopath that has even charmed all of us as viewers into forgetting how horrible he really is.

Adam has gaslighted Ashley [Eileen Davidson] pushing her down the stairs causing a miscarriage. Stolen Faith as an infant [Aly Lind] making Sharon [Sharon Case] believe her baby had died he seduced a male character Rafe Torres [Yani Gellman] who was investigating Adam for the gaslighting/kidnapping incident. Adam has proven he will stop at nothing to get what he wants. Is Adam more ruthless than Victor the answer is ABSOLUTELY – yet we are all mesmerized by his charisma, sense of humor and good looks – the perfect combination of a true sociopath.

Adam seemed to calm his sociopathic behavior when baby Connor was born – like his father Victor, these sociopathic Newman’s children are everything to them. But as of the July 14 episode of Y&R Adam’s gloating over stealing Newman Enterprises got him caught by Chelsea [Melissa Claire Egan], because he wallowed in his glory in beating Victor Newman as he let it slip that he is in fact Adam not Gabriel Bingham. Victor seems to know Gabriel’s personality because his plan to bring him down was to let his ego continue to grow and give him a false sense of security – then BAM, Victoria and the others move in for the takeover and takedown!

Adam has already made one major mistake while gloating – what is next because it is obvious he is slipping just as Victor predicted he will – it does take one to know one. The episode when Victor finds out who Gabe really is will be a showstopper! Perhaps it will be the greatest Y&R episode this year! Victor and Adam really are twin demons cut from the same cloth. It is amazing how Adam has been one of the most despicable characters on daytime yet we are all rooting for him and Chelsea to live happily ever after.

The problem with that scenario is sociopaths are never content which why they need more power and more money – greater achievements and conquests. Adam is already showing his old behaviors as in the July 15 episode he tells Chelsea he cannot do this to Billy [Burgess Jenkins] anymore – he saw how upset Billy was about Delia and it’s time to tell everyone who he is. This was classic Adam Newman manipulating since when does Adam ever care about Billy’s feelings? They have spoke about Delia several other times and it did not provoke him to tell everyone or anyone who he is! Adam did this to play on Chelsea’s feelings because he wants her to think he has compassion and cares about Billy’s feelings which is what sociopaths do – they mimic real human emotion like compassion even faking tears. Just like in the manipulated scene when Chelsea brought up Billy going to jail for shooting him – the “martyr” Adam then says oh no I will not tell anyone about what Billy did to me, I will not send him to jail.

Note: Adam sure did not have a problem blackmailing Jack Abbott with that very piece of information to keep his identity a secret. This was some thick syrup Adam laid on Chelsea, it looks like the old Adam is back which means everyone better look out. Yes we are all cheering Adam on right now but how will we feel one month from now as the cocky dark Adam emerges and does whatever it takes to get what he wants – how will you feel about this charming devil when the snake starts to rear his ugly head?

CBS has promised a summer of sizzle do let’s stay tuned to Y&R. What do you think CDL’ers, are Adam and Victor cut from the same cloth – will Adam go bad again or has he already started? Please leave your thoughts an comments in the CDL comments below!