‘The Young and the Restless’ Spoilers: Sage Begs Chelsea to Keep Quiet – Adam to Reveal Identity of Gabriel at GC Meeting 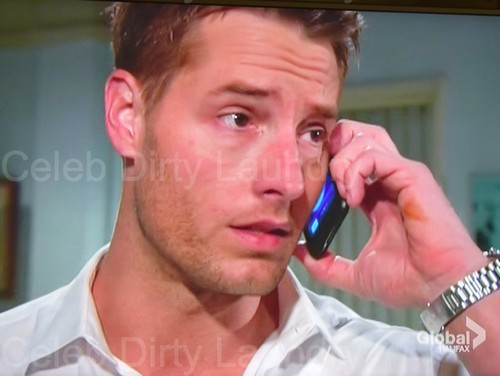 “The Young and the Restless” spoilers for Wednesday, July 15, tease that Adam (Justin Hartley) will go to Jack’s (Peter Bergman) hospital room to fill him in on what happened with Chelsea (Melissa Claire Egan). Adam will tell an unconscious Jack that he’s never seen Chelsea so scared and heartbroken. So far no cops have come looking for Adam, but he’ll fear that he’ll be sent to prison after all of his efforts to secure a new life with Chelsea.

Billy (Burgess Jenkins) will arrive and gripe about how Gabriel (Justin Hartley) is acting so torn up when he doesn’t even know Jack. Billy will say that he won’t lose his brother like he lost Delia (Sophie Pollono). Adam will show sympathy for Billy’s loss and head out. Once they’re alone, Billy will say he hopes Jack will see Gabriel for who he really is once he wakes up.

Phyllis (Gina Tognoni) will want Ashley (Eileen Davidson) to help her get some answers from Victor (Eric Braeden). Nick (Joshua Morrow) will take issue with how Phyllis is trying to stir up trouble. Phyllis will say she believes Victor planned on shooting Gabriel that night in the park, but she needs proof. Nick will think Phyllis misunderstood what Jack tried to tell her and he won’t see why Victor would shoot Gabe. Phyllis will hint that Nick will be sorry for trusting Victor.

Chelsea will confront Sage (Kelly Sullivan) about the secret she’s been keeping about Adam. Sage will insist that Constance (Sally Kellerman) wouldn’t have been able to handle it if she thought Gabriel was dead. Sage will add that Adam has always been driven by his goal to get Chelsea back. Now that she has Nick, Sage understands why. Sage will ask Chelsea not to tell anyone, but Chelsea won’t make any promises. Later, Nick will join Sage and he’ll see that she’s distraught. Sage will say there’s something Nick has to know.

At the station, Victor will remind Victoria (Amelia Heinle) of their plan to bring down Gabriel. Later, Ashley will have a chat with Victor about Abby (Melissa Ordway). Talk will turn to Victor’s self-defense claim. Victor will question if Ashley believes him. Ashley will indicate that something isn’t right about the story. Victor will get upset and think that Phyllis has brought all of this about. Ashley will leave to see Phyllis and they’ll agree that Nikki (Melody Thomas Scott) is the only one who can pry the truth out of Victor.

Other “Young and the Restless” spoilers reveal that Billy will tell Victoria he saw Gabriel and he was surprisingly compassionate. Billy will think Gabe seemed like he was feeling guilty about something. They’ll start to argue about Victor before getting a text about an emergency meeting. It appears Gabriel has an announcement to make.

At Chelsea’s place, Adam will let her know that he’s going to come clean and he’ll keep quiet about how Billy shot him. Adam will ask Chelsea to bring Connor (Michael and Nolan Webb) to see him in prison and she’ll eventually consider it. Adam will apologize for putting Chelsea through all of this and he’ll tell Connor that he’ll always love him. Y&R rumors say that Chelsea will stop Adam from going through with his plan to tell the truth. It looks like the rest of Genoa City may have to wait to get updates on the shocking secret. Stick with the CBS soap to see how long Adam and Chelsea can keep this news under wraps.