The Young and the Restless Spoilers: Marisa Tells Victor He Shot The Real Jack and Marco is Dead – Marco Taunts The Moustache? 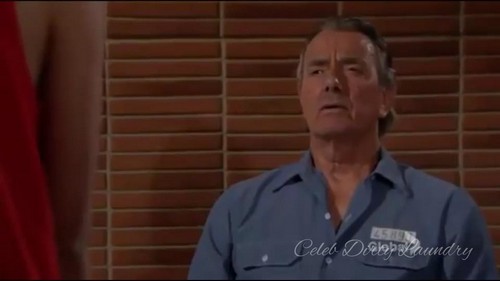 The Young and the Restless spoilers look at the coming encounter between Victor and Marisa. On the July 16 Y&R episode Marisa [Sophia Pernas] visits Victor [Eric Braeden] in jail – she knows who he is but he does not know she is. Marisa is pissed and out for blood. The Moustache welcomes her with his typical “who the hell are you?” to which she replies “it turns out we have a mutual friend.”

Marisa proceeds to tell Victor she knows all about what he has done to Jack Abbott [Peter Bergman] – he tells her to leave and claims he has no idea what she is talking about. She tells him Marco’s [Peter Bergman] name and he’s surprised but still acts like he has not a clue. She tells him about his devious double Jack plan and how he shot Jack to which he tells her she is insane. Marisa tells Victor Marco is dead and you shot the real Jack Abbott!

Victor still does not cop to anything but is very disturbed by what she is telling him. Marisa tells him his world as he knows it is over and she leaves. Victor is wondering what in the hell was that about – is it possible Jack is alive, is it possible I shot Jack… no he blew up on the boat! Victor starts thinking what if the real Jack Abbott was shot – reality is slowly sinking in that he really could go to prison for attempted murder. Victor knows he HAS to find out when Jack wakes up from his coma what is really going on and he has people watching around the clock waiting to tell him as soon as Jack wakes. Now more than ever Victor has to know who is laying in that hospital bed!

As reality unfolds for Victor the plea bargain D.A. Christine Williams offered him is starting to look more attractive. Victor Newman is more alone than he knows right now as wife Nikki is getting ready to try and set him up – she is going to use his love for her to get the truth but will Victor tell the whole diabolical story to Nikki – not in a million years! Victor did not get where he is by being easily swayed by love.

What will Victor do when he finds out he shot the real Jack Abbott? Well Victor cannot tell anyone the dirty truth of the tale of two Jacks or his criminal charges will multiply. The only problem Vic has – I should say the only 3 problems are the people who know about Marco Anicelli: Marisa, Adam and Jack. Technically Marisa is the only one who knows the whole truth because Marco told her everything all the way down to The Moustache’s involvement. Adam and Jack do not yet realize that Victor is behind everything awful that happened but spoilers say the whole story is about to blow sky high – and Victor will not be going home anytime soon. Rumor has it that a very much alive Marco will get in touch with Victor to torment him while he is behind bars. Victor will then know he shot the real Jack Abbott and we will actually see Victor panic.

Marco, Adam and Marisa all have the upper hand right now because Victor cannot tell anyone the truth about Marco because he would never see the light of day again! How ironic when Marco tells Victor you are behind bars and I am free! This looks like it is just the beginning of Victor Newman’s well earned descent to hell. But we all know that Victor Newman is soap opera’s Teflon Don having somehow gotten out of a series of illegal exploits that would have most men jailed for life – so let’s keep our eyes and ears open for an inkling of how Victor might finagle his way out of this mess he has created for himself.

The month of July will explode with revelations so stay tuned to CBS’s Y&R and pick up all the spoilers and news right here at CDL. Well CDL’ers do you think the great Victor Newman will get out of this one or has his luck just finally run out? Please leave your thoughts and comments below.

Watch The Young and the Restless video preview for the Thursday, July 16 episode below