The Young and the Restless Spoilers: Chelsea and Nick Shocked To Learn Gabe Slept With Sage – Paternity Test Reveal 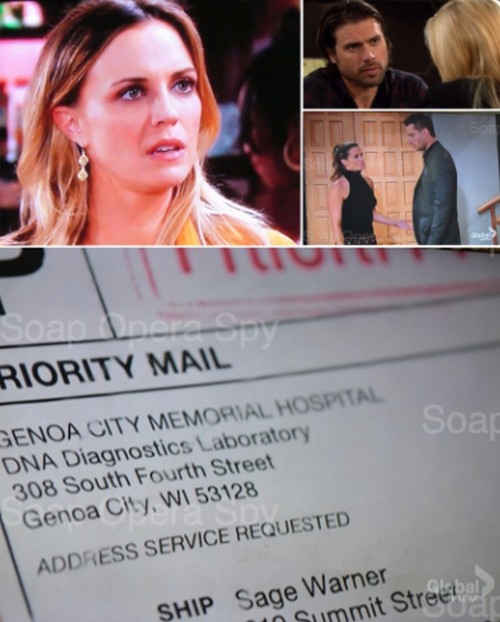 Nick tells Gabe he isn’t worried about the paternity test results to which Gabe replies that Sage would lie just to get her hands on Nick’s bank account. Nick is furious but while these two are bickering Chelsea overhears the conversation and is shocked AGAIN – never a dull moment with hubby Adam. Later Chelsea grills Adam about sleeping with Sage and why would he get in the middle of Sage and Nick baby paternity issues. Chelsea tells Adam he has his own family.

Adam then has to admit to having a one night stand with Sage which unsurprisingly does not go over well with wife Chelsea. Chelsea is furious but Adam tells her she basically has no right to be upset because it happened when she was walking down the aisle with Billy [Burgess Jenkins] and it will never happen again! Chelsea is still devastated – she just got her “dead” husband back and now she has to come to terms with him sleeping with Sage! Can Chelsea overcome this obstacle? Well she better hurry up because the next huge revelation will knock Chelsea off her feet.

Chelsea tries to come to terms with Adam sleeping with Sage then it hits her in an ‘aha’ moment why Adam is so concerned about Sage’s paternity test – because Adam as Gabe told her he was not the baby daddy while Sage was in the hospital with pregnancy complications. It is now sinking in to Chelsea that Adam could be the father of Sage’s baby.

Rumor has it Sage will lie about the paternity of her baby and say it is Nick’s and no one will be the wiser because the 1/2 brothers share some of the same DNA. Sage thinks she will go on her merry way BUT it will not be that easy since Adam will continue to haunt her privately. The only downfall in this sordid mess is if Adam continues to push, risking exposure of his real identity. Will Adam lay down the sword with this baby drama as he recently did at Newman Jabot or will he keep pushing until it is revealed that he is Adam Newman?

Chelsea had some pull in making Adam see the light about the war with Victor [Eric Braeden] and The Abbott brats but will Adam be blinded by the thought of his child being raised by a brother he despises so much? Chelsea has had about all she can take with having to lie to everyone about who Gabe really is – will the discovery that her husband slept with Sage and could be Sage’s baby’s daddy push her over the edge?

In the July 24 Y&R episode Nick tells Gabe the baby is his as he read the paternity test results BUT of course Nick does not realize Gabe is his 1/2 brother! So even though the paternity test results say Newman is a match, Nick does not realize that Gabe is a Newman as well! Nick erroneously believes that Gabe is ruled out as the possible baby daddy… but the word is that in fact the child will turn out to be Adam’s.

Will Chelsea continue to stand by Adam or will this new information push her past her breaking point? Stay tuned to CBS’s The Young and the Restless and watch the saga of Sage’s baby drama unfold. What do you think CDL’ers, will Chelsea stand by her man no matter what or has she had it with the lies? Please leave your thoughts and comments in the CDL comments below.