The Young and the Restless Spoilers: Phyllis Poisons Kelly, Jill and Family Buy Chancellor, Lily Walks In On Devon and Hilary 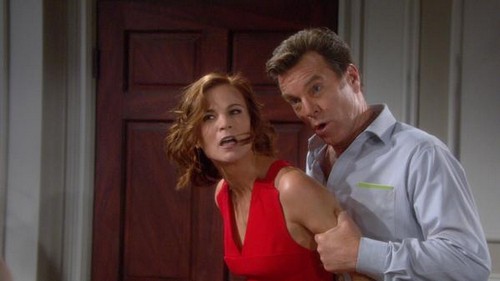 “The Young and the Restless” spoilers for the episode of the CBS soap airing on Tuesday, January 20 tease some must-see drama in Genoa City. Y&R rumors have been floating around for weeks that Phyllis will officially go over the deep end – and judging from “The Young and the Restless” spoilers for Tuesday’s episode that is exactly what is going to happen. CDL’s Y&R spoiler source reveals that crazy Phyllis pays Kelly a visit at the club where she is trying to enjoy a relaxing cup of tea and accuses her of planting the blond wig in her purse. After another war of words between the two women, Kelly passes out and is rushed to the hospital where she learns that someone poisoned her tea!

In other “The Young and the Restless” news, Victor Newman and his shady business practices continue to stir up drama for the residents of Genoa City. Y&R spoilers tease that on Tuesday’s episode of the CBS soap Jill Abbott pays Victor a visit and demands that he sell her Chancellor. Victor caves under the pressure of his financial woes and gives Jill a dollar amount – which she takes back to Cain and Colin. Cain and Jill are discouraged because they don’t have that kind of cash; however, spoilers tease that Colin makes them an offer and wants in on the Chancellor deal. While Jill and her family are trying to scratch up the money they need to buy back Chancellor, Victor continues to spy on the competition at Jabot – and he has their entire office and lab bugged!

“The Young and the Restless” spoilers for January 20’s episode of the CBS soap also tease that Y&R fans can expect to see Lily spending some quality time with her step-mother Hilary at a spa, but Devon just can’t seem to stay away and there is a good chance Lily could get an eyeful of her dad’s wife and brother in an awkward position. Meanwhile back home Neil informs Cain he is getting his eyesight back, but forces his son-in-law to promise not to give Lily or Hilary a heads up because he wants to surprise them.

So, Y&R fans, do you think that Jill and her family will be able to buy Chancellor back from Victor? Will Phyllis be arrested for poisoning Kelly? Will Victor steal Ashley’s secret love potion formula? Let us know what you think in the comments below and don’t forget to check CDL tomorrow for more “The Young and the Restless” spoilers and news.