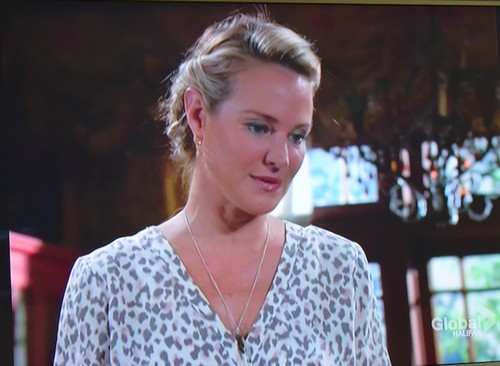 The Young and the Restless spoilers are gathering up some new shocking rumors that could potentially change the lives of many residents of Genoa City. A newly pregnant Sharon Newman [Sharon Case] suddenly stopped taking her bipolar medications when she learned she was first expecting a baby with her boyfriend Dylan MacAvoy [Steve Burton]. She thought the pills may be harmful to her unborn child. Only thing is, when Sharon stops taking her meds, her bipolar condition becomes out of control and we know what that spells TROUBLE.

This medical condition makes Sharon act out in destructive ways without considering the risk of any consequences. Over the last several weeks, we have notice Sharon slowly, but surly losing her grip on reality. According to the newest Y&R rumors, Sharon becomes fixated on her ex-husband and lover Nicolas Newman [Joshua Marrow] along with his new fiancée Sage Werner [Kelly Sullivan]. Sharon is trying to put on a good show in front of others, especially Dylan, but its becoming harder for Sharon to control her fantasy of her and Nick being together again.

We also are hearing additional teasers that Sharon starts to see Sage as a thorn in her side – standing in the way of her plot to win Nick back. She doesn’t trust Sage with Nick or their daughter Faith and seeks out information to prove just that to Nick. Sharon wants to undermine Sage – the problem here is that Sage is hiding dark secrets that could be discovered by a persistent Sharon!

Another The Young and the Restless source reports that Sharon discovers the true connection Sage has between the real Gabriel Bingham [Justin Hartley] and Adam Newman [Justin Hartley]. Along with the plot devised by Sage to let everyone think Gabe was still alive, while Adam was assumed dead. When Sharon threatens Sage with this information, both woman are put in danger and we are told, only one of the expectant mothers’ carries to term after this confrontation! Could Sage or Sharon miscarry?

If all goes according Sharon plans she and Nick will be back together. Again, poor Dylan will be jilted , but this time his mother Nikki Newman [Melody Scott-Thomas] will be there for not only her son Nick, but Dylan as well. As for Sage, she may just continue on to find friendship with Dylan. Whether you love Sharon or not, she certainly knows how to keep things interesting around Genoa City. Come back to CDL for more The Young and the Restless spoilers and rumors.