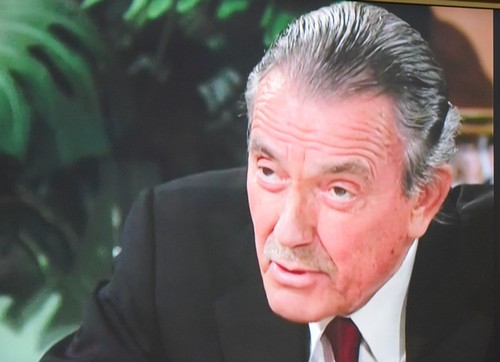 “The Young and the Restless” spoilers tease that the cabin killer will finally be revealed on Wednesday, August 12. It’s been a long and winding road for this complex storyline but CDL predicted Marco as the culprit over 3 months ago. When Austin (Matthew Atkinson) was murdered that fateful night in February, most Y&R viewers had no idea that months of twists and turns were ahead. Courtney (Kelli Goss) eventually became the next casualty in this whodunit. There’s certainly been no shortage of suspects throughout the mystery, but Daytime Confidential recently reported that we can narrow the list down to five.

First up, we have Marco (Peter Bergman). Ever since Victor (Eric Braeden) brought Marco into the picture, he’s been nothing but trouble. Marco undoubtedly had something to do with the murders. After all, Marco was willing to presumably kill the mole, Tobias (Jeffrey Christopher Todd), to make sure his secret died with him. However, a guy like that doesn’t want to get his hands dirty if he doesn’t have to. Besides, Marco might be a bit too obvious. If Marco turns out to be the killer, many “Young and the Restless” viewers are going to be disappointed. Fans deserve a better payoff than that.

Of course, we know that Marco has an accomplice who’s been helping him out along the way. CDL has been predicting that Detective Harding (Chris McKenna) may have a much darker side. Harding’s cop background would easily allow him to change evidence and cover his tracks. Kevin has also been tossing around the idea that Harding isn’t trustworthy. At the moment, Harding looks like the top suspect in this case. Still, “The Young and the Restless” rumors hint that things are about to get pretty wild as the mystery wraps up. It’s possible that the killer could turn out to be someone completely unexpected.

Take Kevin (Greg Rikaart), for example. “The Kev-ster” always seems to be one step ahead of the game. Kevin has a shady past and he’s a whiz with technology. Perhaps Kevin is acting out some sort of twisted fantasy. Kyle (Lachlan Buchanan) is another option. It was definitely odd timing when Kyle showed up just after Austin’s murder and shortly before the Jack swap took center stage. Maybe Kyle has been keeping a few secrets. Even Fen (Max Ehrich) is drawing suspicion because he was supposedly blackmailed into putting drugs in the punch.

Nevertheless, most viewers are in agreement that Kevin, Kyle and Fen don’t have the makings of a killer. Some soap fans on social media have even referred to them as “weenies.” They just don’t seem like burly, hardcore murderers. Anything can happen, but right now it appears Marco and Detective Harding may be the dynamic duo. Did Harding do Marco’s dirty work? Stick with the CBS soap to watch the “Scooby Doo” gang put a bow on this mystery.

So Y&R fans, what do you think about the news that there are five final suspects who could be the cabin killer? Will it be Marco, Harding, Kevin, Kyle or Fen? How will Genoa City residents react when they get updates on the truth? Of course CDL and Daytime could be wrong and the Cabin Killer is someone else entirely…. We will know for sure on August 12 and CDL will have the news at least a day in advance so make sure to check back on Tuesday, August 11 to learn once and for all who the murderer really is. Keep in mind that there remains an solid chance that Austin is NOT dead and is the killer as his body was never properly identified by whiny Summer! Let us know what you think in the comments below and don’t forget to check CDL tomorrow for the latest “Young and the Restless” spoilers, rumors, updates and news.