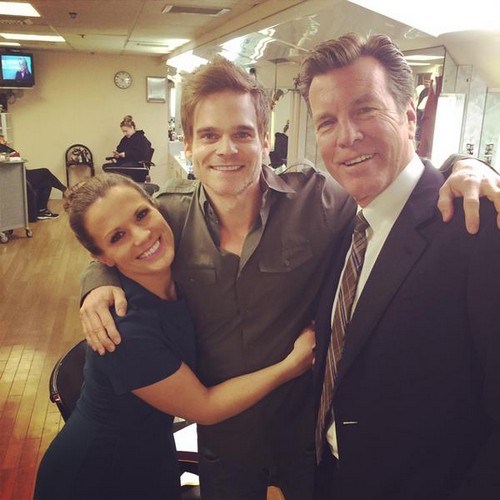 “The Young and the Restless” spoilers tease that March 2-6 will be another exciting week on the CBS soap, packed full of must-see drama and rumor has it Y&R fans will not want to miss a single episode. There is never a dull moment in Genoa City, but there are some especially exciting storylines going on right now. According to “The Young and the Restless” spoilers, this is what Y&R fans can expect to see during the week of March 2.

Monday, March 2: “The Young and the Restless” spoilers tease that on Monday’s episode of the CBS soap Billy Abbott (Burgess Jenkins) confronts Gabriel/Adam Newman (Justin Hartley) and demands to know what his intentions are with Chelsea. We all know Adam is determined to win back the affections of his wife, but if looks like Billy is onto him. In other Y&R news, spoilers also reveal that on March 2 Victor Newman (Eric Braeden) and Jack Abbott (Peter Bergman) will make a pact… but of course Victor has a side deal with Kelly that totally undermines Vic’s ‘new friendly enemy.’

Tuesday, March 3: March 3rd spoilers for “The Young and the Restless” reveal that Y&R fans can expect to see Lily (Christel Khalil) worrying about her father Neil Winters. And for good reason – in the past month, Neil (Kristoff St. John) got his eyesight back, saw his wife in bed with his son, fell off the wagon, and then nearly died of hypothermia after barely surviving a plane crash. If anyone is entitled to a breakdown, it is Neil.

Wednesday, March 4: “The Young and the Restless” spoilers in the latest edition of Soap Opera Digest tease that on March 4th Abby Newman struggles to keep her secret. Meanwhile, across town, Sharon Newman (Sharon Case) and Dylan McAvoy continue to bond and get closer – rumors have been floating around for weeks that Sharon and Dylan (Steve Burton) could wind up hooking up, and the odds of that happening are appearing more and more likely.

Thursday, March 5: Y&R spoilers for the episode of the CBS soap airing on Thursday March 5th reveal that Nikki Newman (Melody Thomas Scott) will have to face the music and “pay for her actions.” CDL’s exclusive spoilers source reveals that a drunk Nikki runs down someone in her car and is charged with murder! It sounds like “The Young and the Restless” matriarch is going to have to start sobering up and working the 12 step program again – but it might be from jail.

Friday, March 6: “The Young and the Restless” spoilers in the latest edition of Soap Opera Digest tease that on March 6th Victoria Newman will be faced with a difficult decision. Rumors were floating around weeks ago that Victoria Newman was going to be written out of the CBS soap and visit her son in Washington indefinitely, however no one from the soap ever confirmed nor denied the rumors that Amelia Heinle was leaving. But, Victoria’s “difficult decision” could mean that Victoria really is leaving Genoa City.

So, Y&R fans, who do you think will come out on top – Adam Newman or Billy Abbott? Will Neil be okay, or should Lily be concerned about her father? How do you feel about the idea of Sharon and Dylan? Let us know what you think in the comments below and don’t forget to check CDL tomorrow for more “The Young and the Restless” spoilers and news.