‘The Young and the Restless’ Spoilers: Drunk Driving Nikki Charged with Murder – Arrested For Killing Someone! 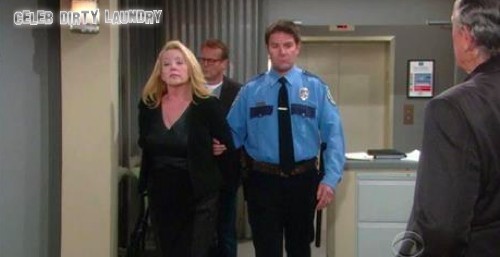 The latest “Young and the Restless” spoilers reveal that Nikki (Melody Thomas Scott) will hit rock bottom on an upcoming episode during the week of March 2. Y&R viewers know that Nikki has fallen off the wagon and her drinking just keeps getting worse, aided and abetted by Neil, who has forsaken his sobriety after learning of Hilary and Devon’s betrayal. According to a new “Young and the Restless” spoilers video, it appears that Nikki’s drunk driving will cost her and someone else dearly. She’ll lose control of her vehicle and make one of the biggest mistakes of her life when someone gets killed on the road. We don’t know who the victim might be, but we do know that Nikki will be arrested and charged with murder. Does this mean that Nikki could be forced to spend the rest of her years in prison? Stick with “The Young and the Restless” to see how this exciting storyline plays out.

Another Y&R character could be looking at a stint in the slammer if he’s not careful. Kyle (Lachlan Buchanan) recently popped back into town and many are suspicious of his motives for returning. The timing was definitely a little shady. After all, he was first spotted shortly after Austin’s (Matthew Atkinson) body disappeared. Summer (Hunter King) is convinced that she’s the one who did Austin in, but the rest of the cabin crew isn’t so sure.

A bloody towel was found in Kyle’s trunk and he didn’t have a scratch on him despite his claims of falling in a ravine. A short time later, what is identified as Austin’s body was found behind the wheel of a wrecked car. “The Young and the Restless” spoilers tease that Kyle will face more questions about his part in Austin’s alleged death and the cover-up. It certainly appears that there’s more to Kyle’s story than he lets on. Keep watching “The Young and the Restless” to find out if Kyle may be the one responsible for killing Austin and moving his body.

So Y&R fans, what do you think about the news that Nikki will be arrested and charged with murder? Will she be able to beat the charges or will she have to do hard time? What about the mystery surrounding Austin’s death? Is Kyle the one to blame for everything or is he just trying to protect Summer? First of all, is Austin really dead? Recall that Summer, who identified the body as Austin, said his head was covered in blood – is this the clue that the body found is NOT in fact Austin’s? Are Austin and/or Kylie involved in a sinister scheme with Ian Ward and Joe Clark? What will happen when the truth finally comes out? Let us know what you think in the comments below and don’t forget to check CDL tomorrow for the latest “Young and the Restless” spoilers and news.