‘The Young and the Restless’ Spoilers: Summer IDs Austin’s Body But Is He Alive, Hilary’s True Motive, Billy Onto Gabriel 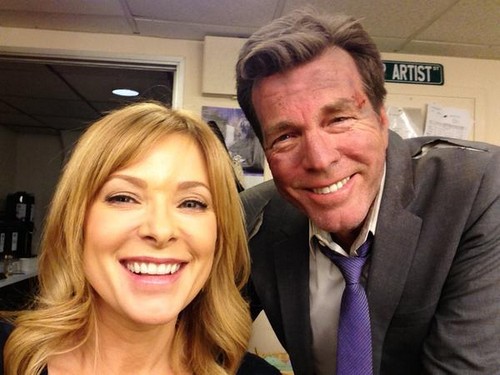 “The Young and the Restless” Spoilers for Friday, February 27, reveal that Billy’s (Burgess Jenkins) suspicions about Gabriel (Justin Hartley) will cause him to do a bit of searching online. Chelsea (Melissa Claire Egan) will discover his digging and wonder what he’s up to. Billy will note that the old photos of Gabriel seem happy and carefree, like a playboy, totally unlike the brooding Gabe they’ve come to know. There’s also the issue of why Gabriel would risk his own life to save Billy and Connor, total strangers. Tack on the fact that Gabriel seems remarkably familiar and it sounds like Billy’s on track to learn the truth about his identity. However, Chelsea won’t understand why Billy feels the need to get to the bottom of Gabriel. Why does he care so much? Stick with “The Young and the Restless” to see if Billy will get closer to Adam’s big reveal.

Other “Young and the Restless” spoilers for Friday, February 27, indicate that Summer (Hunter King) will be heartbroken when Austin’s (Matthew Atkinson) body is found behind the wheel of a wrecked car. She’ll identify the body and the rest of the cabin crew will be puzzled by this shocking development. After all, Austin was dead when they found him. How could he end up in the driver’s seat? But it was odd that Summer said the blood was still on Austin’s head – odd remark! Is the body Summer ID’d really Austin’s?

Of course, Kyle’s (Lachlan Buchanan) recent arrival will have everyone suspicious that he had something to do with it. As Kyle tries to comfort Summer, Kevin and Noah will make the decision to have the bloody towel from his trunk analyzed. Will Austin’s blood be on that towel? If Austin’s blood IS on the towel then it is unlikely the body Summer identified is in fact her husband’s, right? And Kyle has a flashback of looking in the cabin window and seeing the party-goers unconscious. Kyle was at the cabin after all…. We’ll have to wait and see, but it sounds like there’s more to Kyle’s story.

Meanwhile, Neil (Kristoff St. John) will continue to grapple with the aftermath of Hilary’s (Mishael Morgan) affair. Y&R spoilers for the February 27 episode tease that he’ll tell Lily (Christel Khalil) that his whole relationship has been a lie and it was all part of Hilary’s elaborate revenge plot. Neil’s discussion with Cane (Daniel Goddard) a bit later may lead to an “I told you so” moment as things get tense. Ultimately, Neil will apologize and tell Cane that they were both victims of Hilary’s scheme. However, Cane will be skeptical of Hilary’s claims but Neil swears NEVER to forgive Devon. The affair sure looked like the real deal to him.

Hilary will repeat her revenge story to Devon (Bryton James) who also has his doubts. Lily stops in to have a word with Hilary and implies that if she doesn’t get out of Genoa City then she is dead. By the end of the February 27 episode, she’ll be alone and in tears. Stick with “The Young and the Restless” to see if her real plan is focused on reconciliation for Neil and Devon.

So Y&R fans, what do you think about Billy’s search for information on Gabriel? When will he finally learn the truth? What about Kyle’s involvement in the cabin cover-up? Did he move Austin’s body? Is there an Austin body to move – is Austin dead… we aren’t convinced yet. Was Hilary really set on vengeance or is she just trying to patch things up for the father and son? Let us know what you think in the comments below and don’t forget to check CDL tomorrow for the latest “Young and the Restless” spoilers and news.