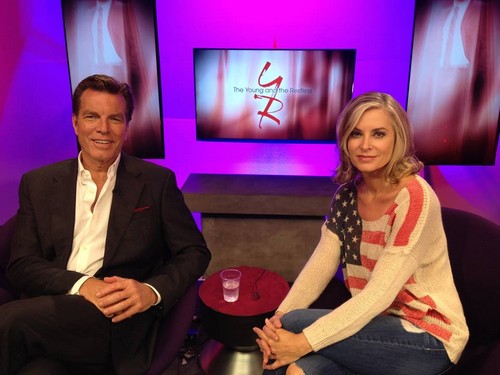 “The Young and the Restless” spoilers for Monday, March 2, show that the aftermath of disaster week will continue with serious fallout for the residents of Genoa City. Nick (Joshua Morrow) will talk to Avery (Jessica Collins) about what happened at The Underground. A reporter will claim to know that the city inspector found structural problems, but Nick ignored them. However, Nick will say that Austin (Matthew Atkinson) never filled him in about the threats to shut the place down. Nick thought he had everything fixed up, but apparently it wasn’t good enough. He’ll feel responsible for the death that occurred that day. Avery will insist that he can’t live his life in regret. Sage (Kelly Sullivan) will also have a little pep talk with Nick. Avery will hint that the pair is quite close, but Nick will remain adamant that they’re just friends.

Other “Young and the Restless” spoilers for Monday, March 2, tease that Jack (Peter Bergman) and Victor (Eric Braeden) will confirm that the plan to protect Phyllis (Gina Tognoni) is still on. Victor will remind Jack that he’s the only one who can prove Kelly (Cady McClain) set Phyllis up. Since he’ll also inform Kelly that Jack intends on turning the charges around on her, Y&R viewers know Victor can’t be trusted. He’ll offer to let Kelly in on his own plan and she’ll be in.

Ashley (Eileen Davidson) will have trust issues of her own. She’ll confront Jack and he’ll admit that he slept with Kelly. He knows the truth would crush Phyllis so he wants to keep it a secret. Christine (Lauralee Bell) on the other hand, won’t be worried at all about protecting Phyllis. She’ll take more than a few jabs at her. When Christine brings up Kelly to Jack, he’ll tell her that Kelly is deeply disturbed and she’s lying about everything. Christine will shout that this time Phyllis will pay for what she’s done.

“The Young and the Restless” spoilers also reveal that things are about to get more complicated for Gabriel/Adam (Justin Hartley). Now that Sage told Chelsea (Melissa Claire Egan) about Gabriel’s feelings for her, Gabe will have to do a bit of explaining. He’ll claim that Sage must be jealous and he feels like for the first time he has a future with the woman he loves. Gabriel will tell Chelsea to come to him if Sage starts throwing around ideas like that again. When Billy (Burgess Jenkins) hears his excuse, he won’t buy it and he’ll indicate that he’s suspected Gabe loved Chelsea all along. Billy won’t be able to shake the feeling that something’s off with Gabriel. Stay tuned to Y&R to find out when Billy will learn the truth about Gabriel’s real identity.

Finally, Kyle (Lachlan Buchanan) will do his best to comfort Summer (Hunter King) on the episode. Summer just can’t get the image of Austin’s head dripping with blood out of her head. However, Kyle will assure her that she can move past this horrible incident. Phyllis won’t understand why Summer feels so responsible, but she’ll offer to plan Austin’s memorial.

So Y&R fans, what do you think about all the action happening on Monday, March 2? Which storyline are you most excited about? Let us know what you think in the comments below and don’t forget to check CDL tomorrow for the latest “The Young and the Restless” spoilers, rumors and news.