‘The Young and the Restless’ Spoilers: Adam [Gabriel] Flirts With Chelsea, Billy Upset Stitch Too Close to Katie and Victoria

BY Amanda Austin on February 3, 2015 | Comments: one comment
Related : Soap Opera, Spoiler, Television, The Young and the Restless 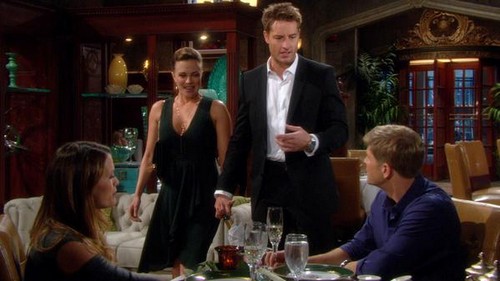 “The Young and the Restless” spoilers for the episode of the CBS soap airing on Wednesday, February 4 reveal that Y&R fans will not want to miss a single second of the exciting drama. “The Young and the Restless” spoilers tease that the day of Nick Newman and Sharon’s custody case over Faith is finally here – and Nick and Sharon’s (Sharon Case) friends and family file in to the courtroom to testify, even their young daughter Faith. According to Y&R spoilers for Wednesday’s episode, the testimonies take a turn for the worse for Sharon when Mariah confirms that Faith didn’t see Sage and Nick doing anything sexual, and then Sharon has a wild outburst and begins screaming at the judge about “taking her baby.”

In other “The Young and the Restless” news, Adam Newman continues to try to get closer to his new neighbor Chelsea, who has no idea that Gabriel is actually her not-so-dead husband. Y&R spoilers tease that Gabriel visits Chelsea (Melissa Claire Egan) and asks for her assistance when he accidentally locks himself out of his apartment, and then she joins him for a cup of coffee and helps him shop for furniture online. Unfortunately, Sage returns home – and spoils Adam’s moment with his real wife.

We thought the never-ending love triangle between Victoria (Amelia Heinle), Stitch, and Billy Abbott was finally in the past. But, according to “The Young and the Restless” spoilers for February 4th, that is not the case. When Billy learns from Stitch that he has moved in to Victoria’s house with her and baby Katie – it is clear that he is not happy about the news. And Chelsea is baffled as to why he cares, seeing as how he now lives with her. Chelsea and Billy’s (Burgess Jenkins) relationship isn’t the only one under tremendous stress in Genoa City. Spoilers tease that on Wednesday’s episode of the CBS soap, Avery and Dylan have round two of their ongoing argument over Joe Clark (Scott Elrod) – and Dylan (Steve Burton) is still furious that she went to her ex-hubby’s hotel room. Is this the beginning of the end of their engagement?

So Y&R fans, do you think the judge will give Sharon or Nick (Josh Morrow) custody of Faith? Do you think that Chelsea will figure out Gabriel is really Adam Newman? Does Billy have any reason to be upset with Stitch and Victoria? Does he still have feelings for her? Will Avery and Dylan break up? Let us know what you think in the comments below and don’t forget to check CDL tomorrow for more “The Young and the Restless” spoilers and news.