The Young and the Restless Spoilers: Kelly Andrews Dies by Her Own Hand Trying To Frame Phyllis – Ben Seeks Revenge! 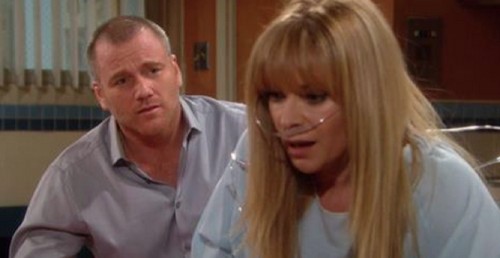 The Young and the Restless spoilers are releasing more shocking new rumors of the upcoming death of a resident of Genoa City. The rumors are giving us some revealing access into the death of Kelly Andrews [Cady McClain]. The last few months on Y&R we have been witnessing the downward spiral of the Athletic Club’s party planner and former girlfriend of Jack Abbot [Peter Bergman].

In a last ditch effort to get Jack’s attention away from his fiancée Phyllis Newman [Gina Tognoni], Kelly is rumored to try and stage her own death by having it look like Phyllis tried to kill her. But in an unlikely turn of events, Kelly is rumored to take her deceitful plans way too far which will in turn, cause her own untimely death by accident.

The Young and the Restless news is also releasing more rumors that Kelly’s brother Ben Russell [Sean Carrigan] becomes extremely worried about his sister Kelly’s irrational emotional condition. In a dire attempt to get Kelly some psychiatric help that she indeed needs quickly, he realizes that’s his eager attempt is much too late.

We are learning that the YR former doctor, follows his sister’s trail out of town to the  Abbott family cabin where he finds Kelly dead by her own hand. Ben is devastated beyond words and blames himself for not getting the psychiatric help she gravely needed.  He also puts the bulk of the blame on Jack Abbott for his sister’s tragic but self-induced death.

The Young and the Restless spoilers also reveal rumors that a drunken Ben goes spastic on Jack and vows to make him and Phyllis pay for torching his sister with their harmful mind games. This is apparently suppose to be a dark side of Ben that we haven’t really seen portrayed this far.

What will this mean for Victoria [Amelia Heinle] and Stitch’s (#Stitcy) new living arrangement and future together? Billy Abbott [Burgess Jenkins] is rumored to become highly concerned about his children Johnny and Katie’s welfare while they are living under the same roof as a crazed Ben. Will Billy try and take full custody of his children away from their mother Victoria if she continues her involvement with Stich? This is definitely a storyline that we will continue to follow and give updates as they become available. Come back to CDL often for more The Young and the Restless spoilers and news!