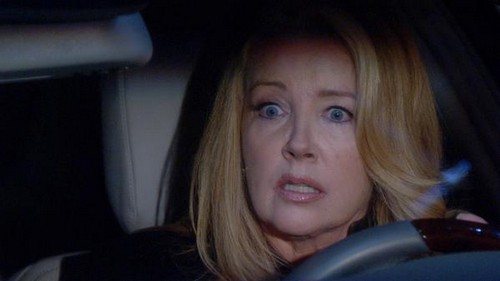 “The Young and the Restless” spoilers for Thursday, March 5, hint that tension will be running high in Genoa City. When we last saw Summer (Hunter King), she had realized that Abby (Melissa Ordway) had been having an affair with Austin (Matthew Atkinson). Now she’s about to go postal right in the middle of the memorial. Summer will demand to know how long the cheating went on and if Abby had been sleeping with Austin in Summer’s bed. Summer will want Abby to have the guts to admit that she slept with Austin. Phyllis (Gina Tognoni) will tell Abby that Summer doesn’t mean what she’s saying and it’s just the stress of the situation, but Abby will scream that it’s all true and she’s sorry. As Abby runs out of the room, Nick (Joshua Morrow) will follow and confront her about the situation. Nick will want to know how she could do this to her own flesh and blood, but Abby’s going through enough as it is and she’ll tell him to leave her alone.

Mariah (Camryn Grimes) will ask Kyle (Lachlan Buchanan) if he knew about Abby and Austin’s affair. Summer will overhear and demand to know the truth. Kyle will say that he was going to tell her the news at the cabin, but Summer will be livid that he waited until Valentine’s Day. Summer will ask who else knew and have one of her usual meltdowns. Avery will listen as Summer says she feels naïve. Summer will ask “Why do people say they love each other and then cheat?” After a bit more venting, Summer will apologize for her rant and Phyllis will tell her that she has nothing to be sorry for. Austin is the selfish, guilty party in all of this. By the end of the episode, Summer will be pounding on Austin’s casket in a fit of anger.

The rest of the cabin crew will be trying to figure out who knew what. Mariah will claim she just found out the night before and she’ll blame Kyle for not telling Summer sooner. Kyle will tell them they don’t know who they’re covering for and stomp off. Kevin (Greg Rikaart) will ponder who would have enough jealousy and rage to kill Austin. Later, the gang will start blaming Abby for the murder, but she’ll throw the speculation right back at them. They’ll realize that neither Summer nor Abby had the strength to stuff Austin’s body in that armoire. Abby will open the armoire to find the words “I know what happened here” written in lipstick. There have been conflicting rumors on who actually did Austin in so stay tuned to Y&R to see if the gang can sort out the mystery.

Other “Young and the Restless” spoilers for Thursday, March 5, tease that Sharon (Sharon Case) will ask Dylan (Steve Burton) over and surprise him with dinner and wine as a token of her appreciation. Sharon will make a toast against loneliness and Dylan will be a little confused by the whole situation. Dylan will say he feels he gave her the wrong impression and that he should really be helping at the memorial. An embarassed Sharon will agree to a rain check and tell him that it really was just about saying thanks. Dylan will have second thoughts and suggest that they order Chinese.

Later, Dylan will offer to help her clean up, but Sharon will say it’s not necessary. After Dylan leaves, Sharon’s fortune cookie will read “He who has friends is never alone.” Dylan will also have a discussion with Avery (Jessica Collins) and she’ll say that it was a mistake when Dylan hit her, but their relationship was not. Avery will tell Dylan that everything they’ve been through only makes her love him more and all they can do is hold each other tighter.

At the hospital, Christine (Lauralee Bell) and Paul (Doug Davidson) are heartbroken over the loss of their baby. Christine will note how the accident reminded her of when Phyllis hit her and wonder if the person who struck her stopped. When Paul tells her that “she” is at the police station, Christine will be stunned and ask if it was Phyllis this time as well. Paul will tell Christine no and leave to sort things out.

Neil (Kristoff St. John) will be released by police and head to the hospital to visit Christine. When Neil tells her that Nikki (Melody Scott Thomas) would never hurt her intentionally, Christine will shout that Paul is trying to protect Nikki and pull the tubes out of her nose. As she tries to get up, Christine will fall into Neil’s arms. The nurse will come to help and Neil will apologize. Christine will say Nikki is the one who should be sorry.

Meanwhile, Victor (Eric Braeden) will demand that Nikki tell him the truth about what happened. Nikki will be adamant that she was sober and it really was just an accident. Victor will remind her that if Adam (Justin Hartley) were still around, he’d be in jail for what happened to Delia (Sophie Pollono). It wouldn’t matter that it was just an accident. Nikki will yell that she’s not Adam and Victor will wonder why she’s acting so nervous when he just wants to help. Victor will ask when Nikki will be free to go, but Paul will walk in and demand that Nikki stay.

Nikki will talk to Paul against Victor’s wishes and she’ll tell him how she was taking Neil home after his drinking binge. Paul will ask if Nikki aimed for Christine as a stunned Nikki screams no. Victor will ask Paul to recuse himself from the case, but there’s no way Paul’s backing down from this one. Paul will ask an officer to read Nikki her rights as she stands there in horror.