‘The Young and the Restless’ Spoilers: Austin’s Video Surfaces, Says He Owes Summer an Apology – Another Y&R Death on the Way? 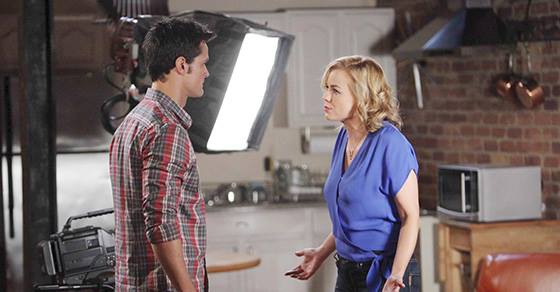 “The Young and the Restless” spoilers reveal that the mystery surrounding Austin’s (Matthew Atkinson) death will soon deepen. A video is about to surface that could have Summer’s (Hunter King) jaw dropping. It appears Austin made the video the day he died and in it he claims to owe Summer an apology. Could Austin admit that he had an affair with Abby (Melissa Ordway)? It’s certainly a possibility. There’s also a chance that Austin could confess the real reason he married Summer.

Rumors have been floating around that Austin is working for Ian Ward (Ray Wise) and he only tied the knot because of an elaborate scheme. Austin’s marriage and the affair that followed may have been part of that plan. Regardless of what Austin expresses regret for, Y&R viewers will be curious about the timing of the apology video. Did Austin know he was about to die or is he even really dead? Just because Summer identified the body doesn’t mean that it’s a done deal. Anything can happen on a soap so you never know when Austin might come waltzing right back into Genoa City.

Other “Young and the Restless” spoilers tease that there will be more trouble brewing at the Abbott cabin. Some rumors out there are hinting that another death is in the works. Perhaps the same person who killed Austin will strike again. Y&R spoilers indicate that Kyle (Lachlan Buchanan) is about to face some tough questions about his involvement in Austin’s death. Maybe Kyle took Austin out and covered it up as an effort to win Summer back. If that turns out to be true, Kyle could kill anyone who learns the truth.

Abby will soon try to get to the bottom of things and she’ll ask Kyle point blank if he killed Austin. It’s not likely that Kyle will blurt out a confession, but he could hatch a plan to kill Abby as a way of keeping his secret safe. Then again, he may use his knowledge of Abby’s affair with Austin to blackmail her into keeping quiet. In that case, it still leaves a rumored death unaccounted for. There are plenty of ways for this storyline to go so we’ll keep you updated on who might be next to kick the bucket on “The Young and the Restless.”

So Y&R fans, what do you think about the news that Austin made an apology video on the day he died? What will apologize for in the footage? Is he really dead or could this be part of a sinister scheme? What about the rumors that someone else will die in the near future? Do you think we’ll find out that Kyle is responsible for killing Austin and the victim to come? Let us know what you think in the comments below and don’t forget to check CDL tomorrow for the latest “Young and the Restless” spoilers and news.