‘The Young and the Restless’ Spoilers: Marco Escapes to Abbott Cabin After Phyllis Beats Him Bloody – Contacts Accomplice 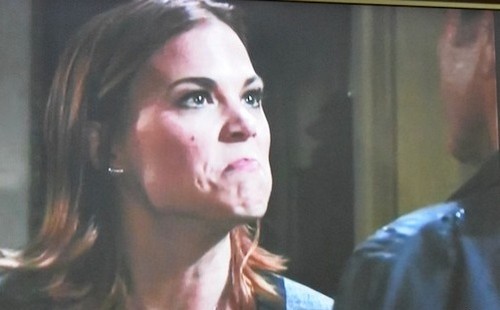 “The Young and the Restless” spoilers for Wednesday, August 5, tease that Kevin (Greg Rikaart) and Mariah (Camryn Grimes) will talk about the thunderstorm as they sit the park. Summer (Hunter King) will arrive with a bodyguard courtesy of Victor (Eric Braeden). They’ll realize that Victor must know about Marco’s (Peter Bergman) ties to the cabin killings. Later, Summer and Noah (Robert Adamson) will question Victor on the matter, but he’ll reply that he has to protect his family from a man like that.
At the athletic club, Jack (Peter Bergman) and Victor will argue about Marco. Victor will think Marco wants his life back as Jack Abbott. Jack will mention that Phyllis (Gina Tognoni) knows about the swap and Victor will be outraged. Victor will say that Phyllis could be a target if Marco finds out she’s in the loop.

Due to the power failure, Neil (Kristoff St. John) and Hilary (Mishael Morgan) will get stuck in an elevator. Neil will hint that Hilary has experience getting stuck in an elevator with Devon (Bryton James), but Hilary’s reaction will make him aware that they stopped it intentionally. Cane (Daniel Goddard) will call the elevator phone and Neil will say he’s stuck in between floors with Hilary. Nikki (Melody Thomas Scott) will yell that they have to get them out of there. Hilary will ask Neil to help lift her up through the elevator hatch, but she’ll stumble. They’ll fall into each other’s arms as they try to get their balance.

Neil will remind Hilary that it isn’t good to build a marriage on lies and deceit. Neil will comment on the fact that Hilary will soon be his daughter-in-law, which will undoubtedly be uncomfortable. As the power comes back on, Neil will give Hilary an ominous warning that honesty should be a top priority in her relationship.

Other “Young and the Restless” spoilers reveal that Phyllis will realize that Marco is with her instead of Jack. Phyllis will shout for Marco to stay away, but he’ll say that she’s just mad because she enjoyed their time together. A struggle will ensue and Phyllis will bash Marco over the head with a bottle from nearby. Marco will end up unconscious with a bloody head. Phyllis will call Jack and give him updates on what went down. Jack will want Phyllis to run to safety, but she’ll insist on staying put.

When Phyllis turns back, Marco’s body will have disappeared. Jack will show up and Phyllis will point out the blood on the floor. Jack will indicate that he’ll take care of this with Victor’s help. Phyllis will be wary of trusting Victor, but Jack will go ahead and call him anyway. Jack will give Victor the news that Marco escaped and he’s injured. When he hangs up, Phyllis will hint that Jack should pose as Marco and get inside details from Marisa (Sofia Pernas). Jack won’t want to dupe Marisa and Phyllis will wonder why he feels the need to be so loyal.

At the police station, Kevin and Mariah will chat with Detective Harding (Chris McKenna) about Victor’s knowledge of Marco. Harding will suggest that the cop who was guarding him supplied the info. Elsewhere, Summer will warn Noah not to be too trusting of Marisa. Victor will also stop by Marisa’s room and say that Marco is back in Genoa City. Marisa will agree to contact Victor if Marco gets in touch with her. Victor will reply that Marisa’s life could depend on it.

After his conversation with Marisa, Victor will send one of his men to find Marco. Meanwhile, Marco will make his way to the cabin and give someone a call. Marco will indicate that he’s run into some trouble and he needs more help. Y&R rumors say that Marco has been getting assistance from someone inside Genoa City all along. Who could be Marco’s shady partner? Stick with the CBS soap to see if there will be an exciting twist to this storyline.