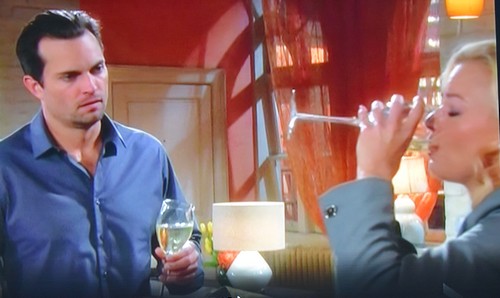 “The Young and the Restless” spoilers for Monday, June 8, tease that Avery (Jessica Collins) will be outraged that Joe (Scott Elrod) is trying to blackmail her. Joe will believe that making love will help Avery remember what they had together. Avery will become fed up by the whole situation and say “One night of sex coming up!” After gulping down a glass of wine, Avery will start ripping her clothes off and Joe will grip her arm. Avery will have a flashback of Joe hitting her. Joe will say he wants Avery to want him and she’ll scream that he should get out. As Joe exits, he’ll indicate that they’ve both made mistakes tonight. Avery will sob once she’s alone.

Lily (Christel Khalil) will leave Cane (Daniel Goddard) an apologetic voicemail. Unfortunately, it looks like Lily’s a bit too trusting. Cane will be busy making out in the park with Lauren (Tracey E. Bregman). Michael (Christian LeBlanc) will see them kissing from a distance and he’ll bring it up when he sees Lauren later. Lauren will say that Michael has driven her to this. It’s Michael’s fault that Lauren is feeling so lonely. Michael will shout that Lauren should divorce him. After Lauren leaves, Lily will arrive and try to convince Michael to fight for his marriage. Michael will hint that Lily shouldn’t worry about his problems with Lauren and he won’t worry about Lily’s problems with Cane. Lily will be puzzled by what Michael means. Meanwhile, Lauren will tell Cane that Michael knows they shared a kiss. Cane will vow to tell Lily before Michael can fill her in on the details.

Other “Young and the Restless” spoilers reveal that Ashley’s (Eileen Davidson) condition is more serious than she lets on. Ashley will plan on making some updates to her will and she’ll continue popping pills. Stitch (Sean Carrigan) and Abby (Melissa Ordway) will show up to give Ashley news about the investigation of the cabin killer. Ashley will seem lightheaded and start speaking strangely. Abby will ask if Ashley is OK and she’ll reply that it’s just migraines. Ashley will add that the stress of the merger has been a lot to deal with. Stitch will leave and Ashley will hint that she’s made peace her daughter’s new relationship. Stitch will talk to Ashley’s doctor and urge him to do more tests. When Ashley finds out, she’ll rip into Stitch for snooping. Suddenly, Ashley will fall back into a chair and appear to be having some sort of seizure. Stitch and Abby will look on in shock.

At The Underground, Mariah (Camryn Grimes) will tell Kevin (Greg Rikaart) that she wants to make a run for it. Kevin will feel that it’s no use. Paul (Doug Davidson) and Detective Harding (Chris McKenna) are already looking into who posted the message on the GC Buzz story. Sure enough, Paul and Harding will arrive to make an arrest. Eventually, Paul will back down and say that the cops might be able to spin this situation in their favor. However, Mariah and Kevin better stay out of this—or else.

Paul will give a press conference detailing how Tobias (Jeffrey Christopher Todd) is now considered the third victim of the cabin killer. Paul will mention that the police have Austin’s (Matthew Atkinson) tablet and it has backup files of all his information. It’s been taken to an undisclosed location for analysis. Kevin will tell Mariah that there is no tablet and Paul is just using this as a tactic to catch the murderer. Y&R rumors say the cabin killer could strike again. Stay tuned to the CBS soap to see if the cops will have to deal with a fourth victim soon.

Watch The Young and the Restless ‘Ruthless Foes’ video promo for week of June 8, 2015 below!