The Young and the Restless Spoilers: Gabriel’s Identity as Adam Newman Revealed – Chelsea Breaks Down, Relationship Over?

BY Heather Hughes on July 7, 2015 | Comments: one comment
Related : Soap Opera, Spoiler, Television, The Young and the Restless 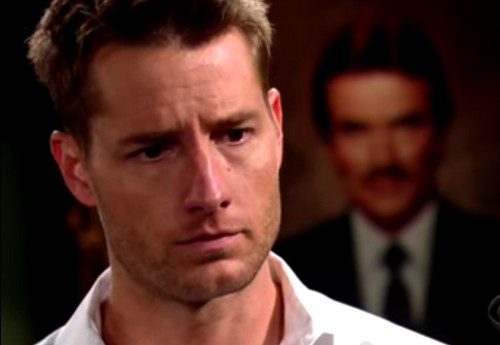 “The Young and the Restless” spoilers tease that Gabriel’s (Justin Hartley) true identity will finally be revealed on July 13. Say so long to Gabriel Bingham and welcome back to Adam Newman! Y&R viewers can expect some big drama to unfold as Adam deals with the consequences of his lies. The latest “Young and the Restless” preview video shows Chelsea (Melissa Claire Egan) turning on the waterworks as a stunned Adam gazes at her adoringly. Adam worked so hard to win Chelsea over as Gabriel, but it looks like it was all for naught.

You can bet that Adam will face a tough battle now that Chelsea knows he’s been lying to her. Still, there could be hope for “Chadam.” Maybe Chelsea will come to realize that Adam did what he did out of love. Adam has always been willing to do whatever it takes for Chelsea and there’s no way he’s going to give up on her now. Stick with “The Young and the Restless” to see if Chelsea and Adam can overcome this massive obstacle.

Related: Kelly Monaco and Billy Miller from GH are going out together in real life!

Meanwhile, Cane (Daniel Goddard) and Lily (Christel Khalil) will encounter an obstacle of their own. Lily’s guilt will eventually prove too much for her to bear. Y&R spoilers say Lily will confess that she’s been unfaithful. When Cane finds out that Lily slept with Joe (Scott Elrod), he’ll be shocked. Cane may have shared a steamy kiss with Lauren (Tracey E. Bregman), but he had no idea it would lead to this. However, Lily’s bedroom romp with Joe seemed pretty meaningless. Perhaps Cane can find it in his heart to forgive Lily once he realizes she was just lashing out.

Other “Young and the Restless” spoilers hint that Victor (Eric Braeden) won’t be pleased that Neil (Kristoff St. John) and Nikki (Melody Thomas Scott) are getting so chummy. Victor will make it clear that Neil needs to back off. If Neil tries to come between Victor and Nikki, it could mean bad news. Across town, Noah (Robert Adamson) will find himself increasingly attracted to Marisa (Sofia Pernas). It sounds like love is in the air, but Noah is moving on from Courtney (Kelli Goss) awfully fast. Nevertheless, the rumors say we could have another hot pairing on our hands. Stay tuned to the CBS soap to see how long Noah and Marisa can resist each other.

So Y&R fans, what do you think about the news that the truth about Gabriel is finally coming out? Are you anxious to see how Chelsea will react when she learns Gabe is really Adam? Will Cane forgive Lily when he gets updates on her fling with Joe? Where are things headed with Neil and Nikki? Will Noah and Marisa become Y&R’s next couple? Let us know what you think in the comments below and don’t forget to check CDL tomorrow for the latest “Young and the Restless” spoilers, rumors, updates and news.

Watch The Young and the Restless video as Gabriel Bingham revealed as Adam Newman!