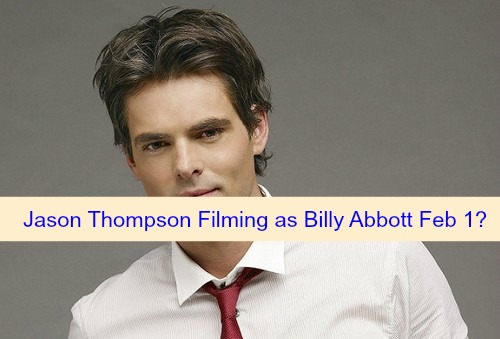 “The Young and the Restless” (Y&R) spoilers hint that Jason Thompson will take over the role of Billy Abbott on February 1, 2016. There has not been official word on the final air date for Burgess Jenkins or the first air date on Y&R for the new Billy.

Shelly Altman (co-head writer for General Hospital) says that Dr. Patrick Drake will be on GH through February sweeps. Jason filming on Y&R from February 1 2016 on would allow an on-air debut between late February and early March.

Jason Thompson stated recently that he MUST wrap up his “General Hospital” storylines by the end of January. Jason never disclosed the reason; however, many fans speculated that he must have accepted a job with another soap – presumably “The Young and the Restless,” and plans to step into the role filming on February 1.

Jason’s contract with ABC ended on October 30, 2015, but he extended the contract for three more months to allow the writers time to wrap up his storylines – including Jason Morgan’s [Billy Miller] reveal and its consequences.

Burgess Jenkins has confirmed his exit from “Y&R” on social media. He cited his reasons for leaving that he cannot continue to travel from the east coast to the west every week and that he appreciated his fans, the writers, and CBS for accepting him as Billy Abbott. His message came as a huge shock to fans, as they struggled to accept the reality of yet another recast of the iconic role of Billy Abbott.

Jason Thompson’s reasoning for stepping away his role, Dr. Patrick Drake, was hard to understand for many fans. Jason said that after a decade portraying the character, he felt the need to branch out in another role. Jason expressed being bored and tired of the storylines he had been given. Jason’s bitter attitude wasn’t a huge surprise for many fans; the writers have not given him a compelling storyline in a very long time.

Do you think Jason Thompson can pull off the role of Billy Abbott? Don’t forget to come back later for juicy “The Young and the Restless” spoilers, news, and updates!