The Young and the Restless (Y&R) Spoilers: Sharon Suspects Dr Anderson – Rejects Baby as Her Own – Flees Fairview? 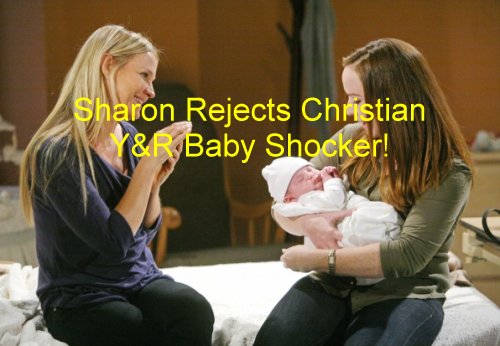 “The Young and the Restless” (Y&R) spoilers tease that Sharon Newman [Sharon Case] will question whether Christian is her child and if Dr. Anderson is legit. She will notice that she doesn’t feel like she went through childbirth and begins to question if things aren’t exactly as they seem.

When Sharon talks to Dr. Anderson [Elizabeth Bogush], her fears are confirmed and she doesn’t know where to turn next. If Sharon just had her baby she should be on cloud nine, right? At first, she was excited and felt her dreams were coming true.

Sharon couldn’t believe all the heartache that worked out in her favor. Dr. A tells her that she never had a miscarriage, that her doctor was mistaken before. Sharon feels confused and isn’t sure if the shady therapist is being honest with her.

Sharon remembers a time when Patty Williams [Stacy Haiduk] cornered her in her room and told her she shouldn’t trust Dr. Anderson. Patty urged Sharon to stop taking the meds that Dr. A prescribed so Sharon could see Dr. A more clearly.

At the time, Sharon didn’t want to her hear it, so Patty escaped the facility to try to reach Paul Williams [Doug Davidson] or Dylan [Steve Burton] so they could check on Sharon. But then Sharon decides to take matters in her own hands.

In fact, she tells her, “I feel wonderful. I have had children before and so this is not normal.” Dr. Anderson tells her that she should stay in Fairview a few more days while her hormones have time to adjust. Sharon refuses, and she questions whether Christian is her child.

For Dr. A, this is a worst-case scenario. She can’t allow Sharon to reject the infant as her child. Dr. A does damage control quickly and convinces Sharon that it could take some time to bond with her baby after all the stress she’s been under during the pregnancy.

Sharon goes back to her room and thinks about her treatment. She doesn’t feel like Fairview can offer her anything else, and asks to be discharged. Dr. A refuses to sign her papers and urges her to stay a few more weeks for observation.

Dr. A even offers that Dylan is welcome to stay with her. Sharon is hesitant and wants to talk it over with Dylan. Then Sharon tells Dr. A that she wants to go home and is prepared to sign herself out of the hospital if her shrink refuses to discharge her.

Will Sharon leave the hospital? Is she going to take her infant with her or reject baby Christian after getting a feeling that he may not be her child? How will Dr. A react if Sharon signs herself out of Fairview against medical advice?

Come back later to CDL for more juicy “The Young and the Restless” spoilers, gossip, and news!