The Young and the Restless (Y&R) Spoilers: To Run and Hide or To Stand and Fight – Sibling Rivalry and Blind Hatred 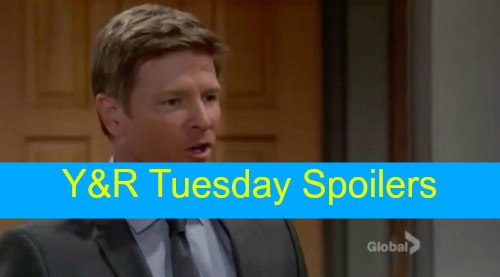 “The Young and the Restless” spoilers for Tuesday, October 20, tease that Victoria (Amelia Heinle) will start to get worried about Billy’s (Burgess Jenkins) deep need for revenge. It could affect Billy forever if he lets it.

Victoria will hint that no one expects Billy to forgive Adam (Justin Hartley), but he still needs to take this vengeance thing down a notch. Paul (Doug Davidson) and Christine (Laralee Bell) will weigh in on the issue as well. Paul will suggest that Billy’s bitterness could backfire at Adam’s trial, but Billy will argue that he can hide it.

Meanwhile, Victor (Eric Braeden) will tell Nikki (Melody Thomas Scott) that he doesn’t like what Adam tried to do to Newman Enterprises. However, Victor will maintain that Adam is still his son when it’s all said and done. When Victoria joins them, Victor will stand up for Adam and insist that he didn’t murder Delia (Sophie Pollono).

Victoria will mention Victor’s recent chat with Nick (Joshua Morrow) about how he would carry on the Newman legacy. Victoria will suggest that it helped her understand Adam’s point of view. Adam has always felt snubbed by his father. Victor will offer Victoria an apology and let her know that he loves her.

Other “Young and the Restless” spoilers reveal that Lily (Christel Khalil) will post Cane’s (Daniel Goddard) bail. Cane will thank Lily, but he’ll soon realize that she still has her doubts. Lily will mention that the police believe Cane took the ransom money to pay for the bad deal at Fenmore’s. Cane will lash out at Lily for refusing to trust him. After all, Cane has learned to trust Lily again after her one-night stand with Joe (Scott Elrod).

Devon (Bryton James) won’t be pleased by the news that Cane is out on bail. Cane and Devon will get into a major confrontation. Neil (Kristoff St. John) will step in and break it up. Devon will head off to question Lily about getting Cane out of jail. Lily will tell Devon that she had to stay loyal to her husband and she’s not sure he’s guilty. Back with Neil and Cane, they’ll discuss the possibility of an elaborate scheme to set Cane up.

At Chelsea’s (Melissa Claire Egan) place, she’ll learn about Victor’s offer to get Adam out of town. Chelsea won’t think trusting Victor is a good idea. Chelsea will insist that their night together was about saying goodbye. Billy will arrive and shout that Adam’s trying to convince Chelsea to defend him on the stand. Billy will add that Chelsea shouldn’t buy all of Adam’s lies again. Once Billy’s gone, Adam and Chelsea will get ready for court. Chelsea will suggest that she can’t help Adam if he doesn’t show up.

At the courthouse, everyone will gather and begin to wonder if Adam is coming. Michael (Christian LeBlanc) will be missing, too. Billy will shout that if Adam runs, it’s Victor’s fault. Chelsea will walk in and hint that Adam is only going to make things worse if he doesn’t come. Luckily, it seems Adam will just be a little late. Y&R rumors hint that Adam’s trial will be a can’t-miss event. Stick with the CBS soap for updates on the verdict everyone will be talking about.