The Young and the Restless (Y&R) Spoilers: Sage’s Testimony on Gabriel Bingham Saves Adam Newman – Gets NOT Guilty Verdict? 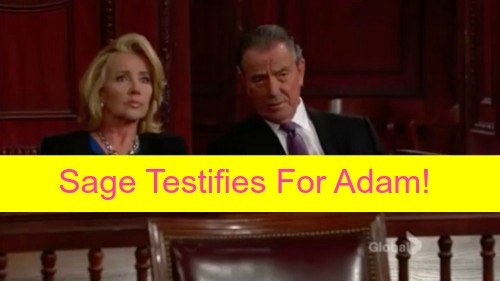 “The Young and the Restless” spoilers tease that Sage (Kelly Sullivan) could be the key to Adam Newman’s (Justin Hartley) chance of an acquittal for running over Delia Abbott over two years ago. Sage could be the key witness in Adam being found not guilty!

The whole town of Genoa City believes that Adam was the one who ran her over. Delia’s parents, Billy Abbott (Burgess Jenkins) and Chloe Mitchell (Elizabeth Hendrickson) believe that Adam should face life in prison for avoiding arrest after the incident.

Michael Baldwin (Christian LeBlanc) offered his services to represent the Genoa City monster, Adam. His family was shocked; he was going to defend him. Kevin (Greg Rikaart) was appalled that his brother would defend Adam after he ‘murdered’ Delia. Long-time fans were in disbelief when Kevin had the audacity to judge anyone, let alone Adam Newman. Does he recall parading all over Genoa City in a chipmunk head?

Michael doesn’t like to lose any case, and he does not intend on losing Adam’s case either. At first, he hoped to be able to help him with a plea deal; however, he thinks he may be able to get an acquittal. His family are not quite as sure. In fact, the thought of Adam walking free have them seeing red.

Michael has a plan; he will call Sage to the witness stand, and she will have to tell the court that she FORCED Adam to take on Gabriel Bingham’s identity without his consent.

According to the rumors, Sage takes the stand and admits that she orchestrated Adam assuming Gabriel’s identity. She tells the court that she felt that Constance (Sally Kellerman) wouldn’t survive Gabriel’s death. She did the only thing she knew at the time; she swapped their identities.

Sage is rumored to drop the bombshell that Adam is absolutely innocent; Gabriel Bingham was the driver who hit Delia that night. For two years, fans thought there was another driver, and it looks like they were entirely correct.

Sage’s relationship with her husband, Nick (Joshua Morrow) is fragile. How will he feel when he learns that she not only knew that Adam was in town, but she was the one who changed his identity? The trial aftermath has been promised to be HUGE and a focal point of November sweeps.

It will be interesting to see how Billy and Chloe react to the knowledge that Adam is innocent. Will they embrace it as the truth or will they continue their vendetta against the evil Adam Newman? Don’t forget to come back for more juicy “The Young and the Restless” spoilers, rumors and updates!