The Young and the Restless (Y&R) Spoilers: Victor Cuts Deal to Save Newman – Marisa Seduces Luca – Sage Shocked at Christening

BY Heather Hughes on December 2, 2015 | Comments: one comment
Related : Soap Opera, Spoiler, Television, The Young and the Restless 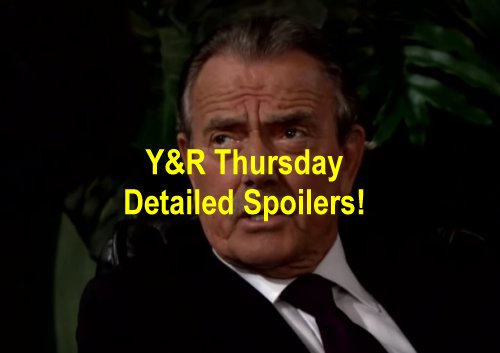 Victor will explain the deal he has with the Santori family. They’ll get a piece of Newman Enterprises in exchange for providing some of the capital to rebuild.

Luca will step away to chat with Marisa (Sofia Pernas) and he’ll announce that the she didn’t hold up her end of the bargain. Luca will admit defeat and head back over to Adam.

They’ll discuss Marisa and Marco (Peter Bergman). Luca will insist that he knows how to handle Marisa. Marisa will meet with Noah (Robert Adamson) in the park.

Noah will insist that he’ll help Marisa find her daughter, but she’ll think all hope is lost. Luca is leaving without giving up any details. Noah will think Victor can help, but Marisa will mention the deal he made with Luca.

Noah will say he’ll figure something out, but Marisa won’t think he can. Later, Marisa will show up at Luca’s suite and demand answers about her daughter’s location. Luca will reply that he still thinks they could be a family.

Luca will add that Marisa must still feel something for him. Marisa will say Luca’s right and they’ll share a steamy kiss as they strip down. Other “Young and the Restless” spoilers reveal that Dylan (Steve Burton) and Sharon (Sharon Case) will have a christening for Sully.

Sage (Kelly Sullivan) won’t really want to go, but Nick (Joshua Morrow) will convince her to come along. At the church, Faith (Alyvia Alyn Lind) will tell Sharon that Sage yelled at her.

Mariah (Camryn Grimes) will be there serving as a godparent along with Stitch (Sean Carrigan). Mariah will explain what happened and Sharon will understand why Sage is on edge.

Once Sage and Nick arrive, Sharon will let Nick know that she’d be happy to keep Faith more often. Sage will apologize for the incident and ask if she can hold the baby. Sharon will hand Sully over and Sage will look stunned.

Meanwhile, Victoria (Amelia Heinle) will open up to Nikki (Melody Thomas Scott) about the situation with Billy (Burgess Jenkins). Nikki will talk about putting up with all of Victor’s shenanigans.

It doesn’t always work out well, but Nikki will think Victor truly has his family’s best interests at heart. Later, Victoria and Billy will argue at the christening.

Victor will tell Billy that it’s his own fault that he lost Victoria. Billy will head to Jabot and give Phyllis (Gina Tognoni) updates on what happened. Phyllis will suggest that Jack (Peter Bergman) won’t be pleased by the news of their plot either.

Ashley (Eileen Davidson) will come in and scold Billy for trying to take down Victor. It was foolish since Victor was bound to find out sooner or later. After Billy is gone, Ashley will start in on Phyllis.

When Ashley asks why Phyllis would choose to be a part of the scheme, Phyllis will bring up how Victor ruined her honeymoon. Adam will show up and Ashley will give him a hard time about whatever Victor has in store.

Ashley will want to know what Victor is holding over Adam’s head. Y&R viewers will be waiting to see how things turn out for Adam. Stick with the CBS soap to see if Adam will obey Victor’s orders.