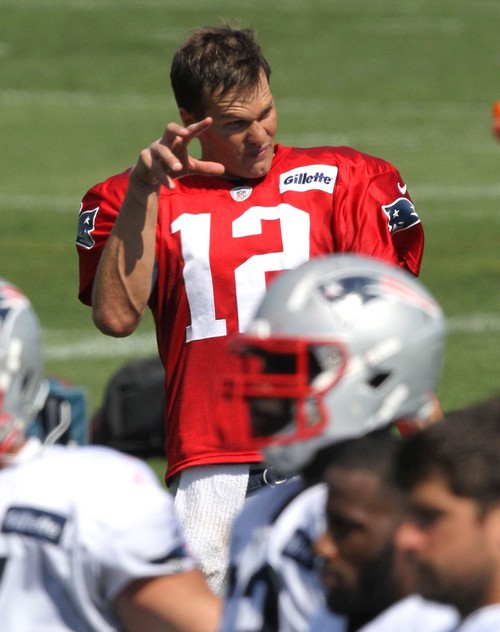 The divorce rumors plaguing Tom Brady and Gisele Bundchen are very real – the Patriots quarterback and supermodel’s marriage has been steadily deteriorating over the course of the past few months. Tom and Gisele’s relationship has been under some serious strain since Deflategate and the Superbowl fiasco, and Brady has been taking his work stress out on his wife and the mother of his two children: Benjamin and Vivian. According to a new report, Gisele Bundchen is so fed up with her husband – that she has consulted with divorce lawyers!

This week’s edition of US Weekly reveals that while Tom and Brady and making an honorable attempt to remain living together in their Boston home with their two kids; the couple’s marriage is strained – at best. Divorce rumors have plagued them all summer, but there is actually some truth to them and Gisele Bundchen has been meeting with divorce attorneys.

An insider source dished to US Weekly, “Tom’s become very nasty and irritable and started acting out on her. Their spats have become so heated that Bundchen recently consulted with a divorce lawyer. Tom thinks it’s only a threat. But this is definitely a rough patch. Things are very tense right now. This could be the end of them.”

This just goes to show that you can’t believe everything you see on Instagram. Gisele has been posting beautiful family photos – making her married life appear to be nothing but perfection, when in all actuality the couple is allegedly discussing getting a divorce. There may be some hope for Tom Brady’s marriage though. A verdict came in from the judge on September 3 in the Patriots Deflategate case – and the judge ordered that Tom Brady’s suspension be nullified and ruled that Brady had nothing to do with deflating the balls, nor was he even aware of it. Perhaps now that Tom’s name has been cleared and his job is not in danger – he won’t be so “nasty and irritable” to his wife and they can begin working out their issues.

Do you think there is hope for Tom Brady and Gisele Bundchen? Will they be able to save their marriage and avoid a high-profile divorce? Let us know what you think in the comments below!