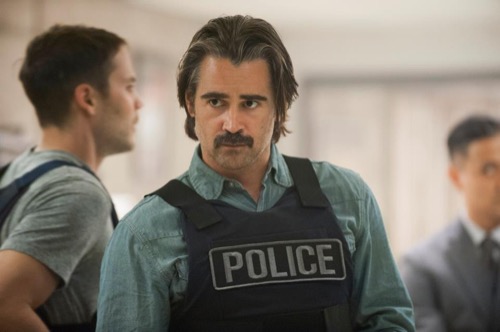 Tonight on HBO their new crime drama TRUE DETECTIVE airs an all new Sunday June 28, season 2 episode 2 called, “Night Finds You,” and we have your weekly recap below. On tonight’s episode Ben Caspar’s autopsy reveals the gruesome details of his demise, and Ray [Colin Farrell] and Ani [Rachel McAdams] wonder if it has anything to do with his fondness for prostitutes.

On the last episode season 2 began with the murder of a corrupt California politician with possible ties to a career criminal, and the ensuing investigation that brought together three law-enforcement officers from different jurisdictions. Did you watch the last episode? We recapped it all right here for you.

On tonight’s show per the HBO synopsis “Ben Caspar’s autopsy reveals the gruesome details of his demise, and Ray and Ani wonder if it has anything to do with his fondness for prostitutes. Meanwhile, Frank looks into what might have happened to his missing fortune.”

We will be live blogging True Detectives season 2 episode 2 with all the up-to-the-minute details at 9PM EST so make sure to come back to this spot and watch the show with us.   Make sure to refresh often so you get the most current info!  While you wait for the episode you can catch a sneak peek of tonight’s episode BELOW!

Frank is resting in bed with his girlfriend, Jordan, and telling her a story about his childhood. His father used to drink a lot and he found himself often trapped in a rat-infested basement.

Officials come together to discuss who should be in charge and involved in solving the murder of Casper. Ani, Ray, and Paul are all working the case. Ani is given word that she will be going to Vinci and working briefly alongside Ray. Her boss tells her to keep an eye on Ray, as word on the street says that he’s “bent,” which he is. Ray is told by his bosses that he will also be working the case. Ray asks them if he is supposed to “solve this or not?” They tell him…”Just no surprises.” Paul’s bosses say that if he were to work this case, then it might help restore his image, which was tainted when he was accused of making sexual advances on a young actress he pulled over. He says that he will involve himself with this case if he can “get back on his bike” in the future.

Paul visits his mother. Their relationship is not exactly a warm and fuzzy one. He tells his mother that he’ll be working a special case and will be gone for a while.

Ani and Ray visit the house of the victim. A person working the crime scene says they’re surveying the house to see what might’ve been stolen. Ray and Ani aren’t there for long. Soon, they’re back in the car. Ray looks over Casper’s calendar book. Ani says that they need to call everyone in that book.

Casper took Frank’s money and, since Casper didn’t submit his money to the company as a buy in prior to his murder, then he’s basically screwed. The head of Catalyst Group, the company Frank was trying to invest in, says that he can offer him the buy-in again ($7 million). However, Frank gave up everything he had to Casper. Now, he has nothing.

Annie, Ray, and Paul meetup in what looks to be a hangar filled with evidence boxes. Paul discovered that he was making frequent withdrawals. On the bank statements, they discover a connection to Catalyst Group. Next, Ani finds some clues as to where he was visiting by analyzing his GPS coordinates.

Ray goes to meet with his son; however, his son isn’t there. Just his ex-wife is there. She says that he can’t be around Chad anymore. She’s filing for sole custody. Ray’s crushed.

Frank threatens a man who supposedly runs sweatshops in Vinci. Frank tells him to watch it before he pisses off more people.

Ray and Ani visit Casper’s psychiatrist. The doc says that the facility he works for was founded on its need for discretion. Eventually, the doc tells him that he’s willing to help. Ani asks what he was being treated for. He reveals that he was being treated for a variety of things, including guilt, stemming from his desire for “young women,” escorts in particular. He says he was sexually charged but never violent. They leave with this helpful information.

Frank goes to visit Austin, the chief of Vinci police. Frank tells him that Casper died with the money he gave him in his pocket. He needs this murder solved because whoever killed Casper now has his money.

Ani and Ray are in the car trying to piece together the story with the new information they gleaned. Things get personal, and Ray tells her about some of the “bad habits” and stories she might hear about him. He says some of them are true. Next, he asks her about the Good People, the commune she grew up in. Ani drops Ray off. Before he leaves, he says that maybe they aren’t meant to solve this case – because why didn’t they put a team of people on this case? Why isn’t there more press surrounding these events, which are sure to be high profile? Ani asks, “How compromised are you?” He doesn’t answer the question and shuts the door. She drives away.

Paul’s girlfriend gets upset after she finds a news story about his sexual assault scandal. She asks him why he didn’t tell her about it. He says because it’s not true and he didn’t want to think about it or bring it up. She says that she can’t keep doing this, that he hurts her too much when he’s around. She says that he fills her with doubt. She breaks up with him. Paul leaves and tells her that “this” is all on her. It’s not his choice to break up with her.

Frank visits a club and talks with an escort to see if she ever met with Casper. She says yes, she saw him a while ago.

Frank and Ray meet in their fave bar.

Frank slides a note across the table. He tells Ray that Casper had a second home, one he used to meet with his hookers. Frank tells him that, maybe, by this time next year he could be Chief of Vinci Police. Ray says that he doesn’t want that and, actually, he’s getting tired of working for him and playing dirty. Frank says that’s ridiculous. He slides money across the table and says that he doesn’t want him talking like that again.

After awhile of chatting with the bar waitress, Ray gets up from the table. The bartender says that he forgot his money. He says, “That’s not mine.”

Looks like Ray is turning over a new leaf.

Ray goes to check out the house Frank told him about.

He snoops around. He sees a sound-proof room and various other things, such as recording devices.

Ray’s surprised by another person in the house.

Ray’s shot with a shotgun by an individual in a strange mask.

Ray falls to the floor.

The individual walks over to him and shoots him once more in the stomach.