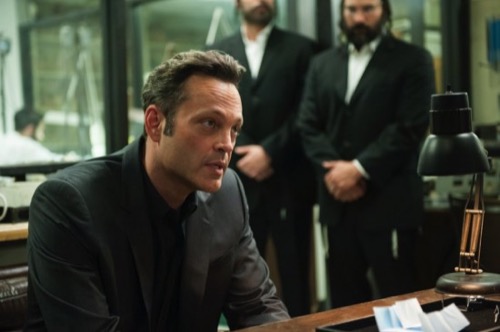 Tonight on HBO their new crime drama TRUE DETECTIVE airs an all new Sunday July 26 season 2 episode 7 called, “Black Maps and Motel Rooms.” We’ve got your recap down below! On tonight’s episode Precautionary measures are required by Ray, [Colin Farrell] Ani [Rachel McAdams] and Paul [Taylor Kitsch] to elude detection as they try to put the mystery’s clues together.

On the last episode Ani went undercover to infiltrate an exclusive party, while Ray and Paul kept track of her every move. Elsewhere, Frank met with Mexican drug dealers on a quest to find a missing woman who has information about Caspere. Did you watch the last episode? We recapped it all right here for you.

On tonight’s show per the HBO synopsis “precautionary measures are required by Ray, Ani and Paul to elude detection as they try to put the mystery’s clues together. Meanwhile, Frank deals with the fallout of his betrayal.”

We will be live blogging True Detective season 2 episode 7 with all the up-to-the-minute details at 9PM EST so make sure to come back to this spot and watch the show with us.   Make sure to refresh often so you get the most current info!  While you wait for the episode you can catch a sneak peek of tonight’s episode BELOW!

Ani and Ray are talking in a hotel room after the party. Ani’s pretty traumatized after what happened. She’s crying, and she tries to come onto Ray, but he says that her doing this won’t help her any – so he distances himself from her and goes to check on Paul and the young woman they rescued from the party.

Paul and Ray are talking about their next move, and soon Ani comes in. Meanwhile, Paul gets a text from an unknown number that features two pics of him making out with his buddy from the war. He makes an excuse to leave and says he needs to check in at home.

Frank’s playing cards by himself. Jordan comes in and asks him how much liquid money he could pull together right now. She says that they could walk away now – but he’s not into walking away.

Paul has his girlfriend in the car. He’s taking her somewhere so she’s safe, and he tells her that someone sent him some pics while he was “working on that case.”

Meanwhile, Ani’s talking with her sister and says she needs to disappear for awhile because the people at the party might think that she was her.

Paul sets up his girlfriend in a hotel and tells her that, right now, the less she knows the better.

Ray and Frank are talking at a poker table. There’s nobody in the room. Ray tells Frank about some documents he got from Catalyst Holdings. He gives him some information about Blake and a man named Osep – and that it sounds like they worked together to screw Frank out of his money.

Ani talks with the young woman she rescued from the party. She says that her sister “put her onto” her case. She shows her some pictures that she got and asks who might’ve sent them to her. She says they’re from Tasha, Caspere’s #1 girl. She says that Casper got her into the circuit. Eventually, the woman says that she didn’t want to be “rescued.” Soon, the woman’s sister comes.

Frank has a meeting with Blake. He questions Blake about what he got caught doing to turn his back on Casper and kill him. He smashes a glass against his face and it shatters.

Ray goes to meet the state attorney, the one leading their investigation, but she’s been killed.

Frank’s about to kill Blake when he says that he can get back his money. He stops. Blake tells him there’s going to be a big cash exchange tomorrow night – and Osep will be there. After squeezing some more info from him, he shoots him in the stomach. Blake falls to the floor and bleeds out.

Ani goes to visit her father to ask about some people in a photo. Soon, she tells her father that she remembered the man who came to steal her away. She remembered the man’s face after tripping on the drugs at the party. Her father asks if she’s going to “turn herself in.” She says, “You’ve never asked if I did it.” He says that he doesn’t have to because she’s the most honest person he’s ever known.

Her ex partner comes to the park and tells her that there’s an APB out for her arrest. She has him follow her father and sister to Eugene, where they’re headed to lay low.

Frank talks with one of his people and says that they’re in a pinch now. Everyone’s bought. Jordan comes into the office and sees Blake’s dead body. He says that they’re going to take everything – even the stuff they’ve got. He tells her to leave home and that he’ll meet up with her tomorrow.

Next, Frank goes around planning his next moves, getting all the pieces in order: new passport, cars, firearms, and a ways to move money in the form of diamonds.

Ani, Paul, and Ray meet up in the hotel. They try to figure out who killed Caspere. They realize that Tasha was probably planning to blackmail him – but they can’t understand why anyone else would kill him, as his murder exposed their activities.

Paul gets another text from his blackmailer, saying he needs to act by midnight or bad stuff’s going to happen.

Frank sees Austin at the casino bar and lets him know that some people in his “house” are working to see him out of office. Frank kicks him out of the casino. Next, Osep and his crew comes in. Osep tells him that the clubs are his now. Osep says that he’s taking this much better than expected. Frank asks what his prospects are, and Osep tells him that they were thinking about placing him on a salary to manage the day-to-day activities of the clubs. Frank, of course, has other plans.

Paul calls Ray and tells him about the pics. He says that it’s his “own thing” and says that he might be “walking into something.” Ray tells him not to do it then. Turns out the person blackmailing him was the other man he slept with – the other guy in the photo. He’s working for security company, now employed by Catalyst Group. Paul is taken inside and is going to be interrogated.

Paul’s led into a dark tunnel. A big man walks forward and says, “I hear you been looking for information about me.” Don’t know who this is.

Frank clears out his club.

The man tells Paul that these tunnels run all over the city. The man says that it was a happy accident that they stumbled upon the pics of these two in Detective Dixon’s apartment. They used these then to blackmail him. The man wants the documents that were stolen from the party in Monterey. Paul makes a deal, saying that he’ll call Ray. He says that he doesn’t care about either of them.

Frank pulls the gas and lights a laundry basket. Then he walks out of the casino.

Paul makes a run for it. He takes the man hostage and tells the henchmen to kill their flashlights. He gets away. Barely.

The people are coming after Paul now in the tunnels. Paul manages to kill one of them. He kills another one of them. He makes a run for it again and hides. Two more come for him. He sneak attacks them and kills them.

He finds a ladder leading out of the tunnels.

Ani and Frank start making out.

Frank goes around blowing up all his clubs. He retreats to the hills, listening to the sirens, and watches his work.

Paul makes it out of the tunnels. He’s about to call Ray when Ray’s boss shoots him. Paul’s dead.