Tyga and Blac Chyna Get Back Together – Kylie Jenner Jealous? 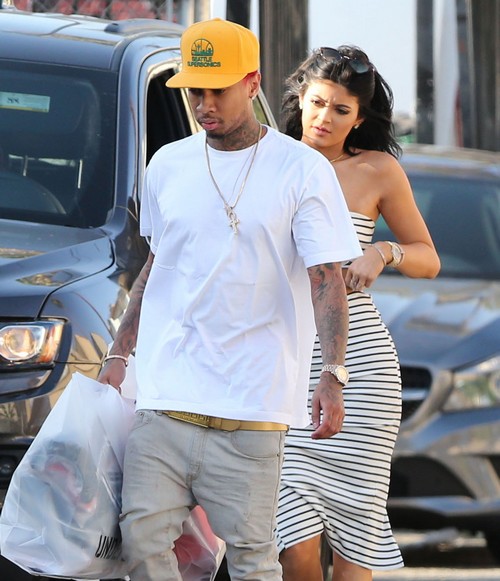 Tyga and Kylie Jenner never made sense as a couple, and not just because of their vast age difference. Tyga has a baby with his ex, Blac Chyna, and Kylie Jenner is only 17 years old – almost a decade younger than Tyga! And now, it’s being rumored that Tyga was trying to hook up with Blac Chyna behind Kylie’s back, even though we really only have circumstantial evidence supporting that.

It all started when Tyga tweeted, “Give it up.Get over it. Live Your Life”, which many people thought was a direct message to Blac Chyna. Then, Blac Chyna [because she can never lets a message go unchallenged] replied with a screenshot of alleged texts from Tyga, all of them asking her when she’s free, asking to hang out, and asking them to be a family again. Basically, if those messages are real, then Tyga was very, very clearly trying to get back together with Blac Chyna and reunite as a family – and all behind Kylie Jenner’s back, as far as we know.

Of course, Blac could very easily be faking these screenshots, which we wouldn’t put past her. The messages are coming from someone saved as ‘Kings Father’, but we all know how easy it is to fake iPhone messages. Plus, Blac Chyna has been embroiled in a pretty long-running feud with both Tyga and Kylie Jenner, even though she and Tyga are still raising that poor child together. This could have been just a long, roundabout method to get back at Kylie Jenner and Tyga, or she could have genuinely had incentive to start another row.

What do you guys think? Was Tyga trying to cheat on Kylie Jenner with his baby mama and/or trying to get back together with Blac Chyna behind Kylie’s back? Let us know your thoughts in the comments below.