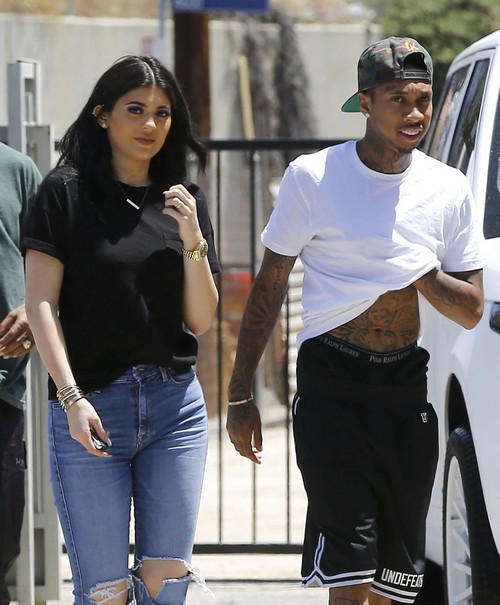 Kylie Jenner just got Blac Chyna’s used car as her 18th birthday gift from Tyga! This may actually be one of the funniest things we’ve heard in a while. Kylie Jenner, who will be turning 18 on August, 10, recently celebrated her birthday, and her boyfriend, Tyga, gifted the young reality star a luxurious Mercedes G-Wagon.

Now, TMZ is reporting that the beautiful car was actually re-gifted by Tyga, and you won’t believe who owned it first. If you guessed, Tyga’s 27-year-old ex-girlfriend Blac Chyna, then you would be right! You’ve got to be kidding us. What in the world made Tyga think it was okay to re-gift a car that he bought for Blac Chyna, and give it to his current girlfriend Kylie Jenner?

Tyga gave Blac Chyna the car back when the two were dating, and had recently asked Blac Chyna to return the car to him, apparently, so he could give it to Kylie Jenner. On top of this, Tyga went as far as rewrapping the car in a red wrap, instead of the original white color, hoping that no one would notice that he re-gifted the G-Wagon. Unfortunately for Tyga, it doesn’t take much to realize that the license plates are the exact same, so his efforts at disguising his hand-me-down gift were useless.

The worst part of all of this is that Kylie Jenner and Blac Chyna have been in a longtime feud, ever since Blac Chyna called Kylie Jenner out for being a minor and dating Tyga. We guess Tyga didn’t think it would be an issue in giving the car to Kylie Jenner, but we are sure, now that Kylie knows the truth, she will not be driving the Mercedes G-Wagon much longer.

What do you think of Tyga re-gifting his ex-girlfriend Blac Chyna’s G-Wagon and giving it to his current girlfriend Kylie Jenner? Are the rumors of Tyga being broke and living of Kylie’s money true? Do you think rewrapping the car was a shady thing to do? Let us know your thoughts in the comments below.

Kylie Jenner and her boyfriend Tyga stop by a car dealership to pick up a Range Rover on August 7, 2015 in Los Angeles, California FameFlynet