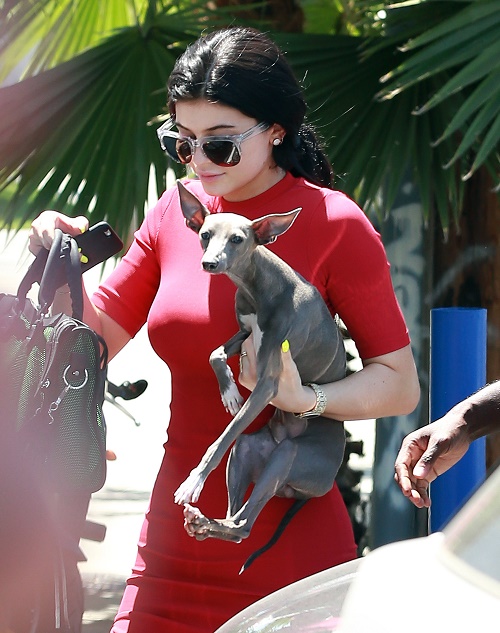 We’re not saying he’s a gold-digger or anything, but Tyga is totally using his underage girlfriend Kylie Jenner as his own personal ATM. The rapper is reportedly broke, and he recently was ordered by a judge to pay $80,000 in back rent to his previous lawyer, and another $20,000 to a sexual abuse victim that sued him over two years ago. But Kylie, being the dedicated girlfriend that she is, has moved her broke 25-year-old boyfriend into her new Calabasas mansion and is helping him pay off his debts.

We have been reporting for months now that Tyga is using Kylie Jenner for her money – and apparently we aren’t the only ones who think that. A source close to the Kardashians dished to CDL that Kris Jenner is panicking over her daughter’s dwindling bank account, and the momager is trying desperately to help her 17 year old daughter see the light before it is too late and she is just as broke as her boyfriend.

An insider dished to CDL: “Kris knows that Kylie paid off Tyga’s back rent – but Kylie won’t admit it. There is no way Tyga had that kind of money laying around, and it is pretty suspicious that the bill was miraculously paid off. Kris is livid that he moved in with Kylie and is basically living there rent free. Now, Kris is threatening to press charges against Tyga since Kylie is still technically a minor for another month if he doesn’t move out of Kylie’s new mansion. It’s getting super messy.”

So, basically, Kris Jenner could care less if you sleep with her teenage daughter – as a matter of fact, she thinks it is cute. But when you start messing with her family’s money – it means war. Seems legit. The thing is…Kylie claims to have been supporting herself financially since she was 14, so it’s really none of her mother’s business if she wants to drop hundreds of thousands of dollars that she made on her bum boyfriend.

Do you think that Kris Jenner is overstepping her boundaries? Or should she have over-stepped them a long time ago? Let us know what you think in the comments below!