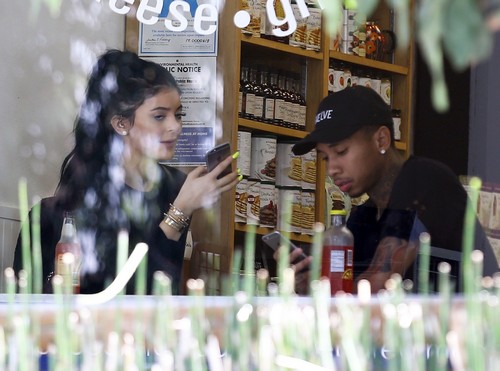 Is Kylie Jenner paying off her boyfriend Tyga’s $80,000 back rent bill for him? Since the 17-year-old Keeping Up With The Kardashians star began dating the 25-year-old rapper, their relationship has been plagued with rumors. But one rumor that just won’t see to die is that Tyga is using Kylie, and slowly draining her bank accounts, which is why the Kardashians are desperately trying to help her see the light before she does something insane like marrying the rapper without signing a prenuptial agreement.

Kylie Jenner is young, clueless, and hopelessly in love with Tyga. Tyga on the other hand is hopelessly broke, and in love with Kylie’s bottomless bank account. Tyga was just in court earlier this month because he owes a video vixen $20,000 in an unpaid lawsuit after she claims she was sexually abused on the set of one of his music videos. Tyga was back in court for another lawsuit – apparently he owes his former landlord $124,000 in back rent!

TMZ reports, “Tyga has a Monday deadline [June 29] to fork over $80,000 to his ex-landlord in Calabasas. Both sides agreed on that amount to cover back rent payments, if you include interest he actually owes $124k so the settlement in a sweet deal. But, obviously paying on time isn’t Tyga’s thing. So, during a hearing on Thursday the judge gave him a stern warning: meet the deadline or the landlord is going to nail you for the full $124k.”

Tyga couldn’t even afford to pay off the video vixen the $20,000 that he owed her – it’s safe to say that the rapper doesn’t have an extra $80,000 lying around. Is his girlfriend going to pay the back rent for him? A source close to the Kardashian family dished to CDL, “If Kylie hasn’t paid it off for him already, then she probably will before the day is up. Tyga basically has her brainwashed. He has her convinced that they are building their own brand on their new reality TV show, and that they are going to surpass super couple Kim and Kanye’s earning power in no time. Kylie is falling for it hook, line, and sinker.”

This is exactly why 25 year olds are not supposed to date teenage girls: 17 year olds are not financially responsible yet, easily manipulated, and have relatively no relationship experience. Tyga is basically robbing Kylie blind. Do you think the rapper will dump Jenner once he has spent all of her money? Or does he truly care about her? Let us know what you think in the comments below!

Kylie Jenner and her rapper boyfriend Tyga enjoy lunch together in Calabasas, California on June 29, 2015. The happy couple recently returned from France. FameFlynet