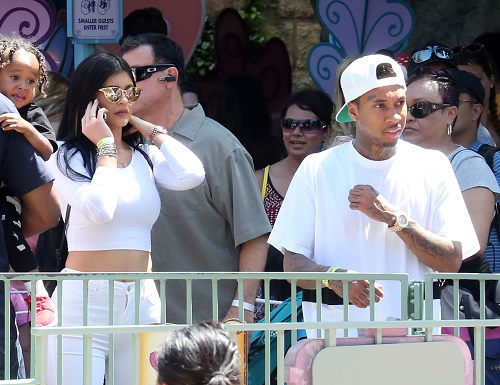 Kylie Jenner’s boyfriend Tyga just released a new song titled “Pleazer” with the assistance of his pal Boosie Badazz – and it’s a hot mess! Tyga might want to reconsider his feud with Nicki Minaj and Drake because it sounds like, at this point, he could definitely some of their help. And we’re not just bias – the comments and feedback from Tyga’s actual fans are NOT good.

“Pleazer” is definitely NSFW, and honestly it’s hard to even figure out what is going on in the song in between all of the “She’s a real d—k pleazers.” But insiders say that Tyga’s song has already rubbed Kanye West the wrong way because, apparently, he is the only one who is allowed to rap about having sex with the Kardashians. In Kanye’s defense, Tyga’s girlfriend Kylie isn’t even a Kardashian – but that doesn’t stop Tyga’s pal Boosie from dropping “Kardashian Pu—y” references. And Kylie even gets a shout out – sort of. Tyga raps about his current relationship “landing him a felony.” Oh, and he apparently “loves a bitch with long ass nails,” so kudos to Kylie on that.

At this point, Tyga’s “straight to iTunes” collaboration with Boosie is almost sad. Seriously, it’s like he went to court and the judge ordered him to pay up his sexual assault victim (Allison Brown) the $25,000 that he owed her – so he ran home and recorded this song and uploaded it to the internet within a few hours. He probably called Boosie and said, “Hey I got to come up with $25,000 ASAP, let’s just record something tonight and see if we can get any suckers to pay 99 cents for it on I-Tunes.”

Kylie Jenner must be so proud of her boyfriend right now. Because, you know, a sign of true love is peddling a song on the internet about your 17-year-old girlfriend’s vagina. Stay classy Tyga!