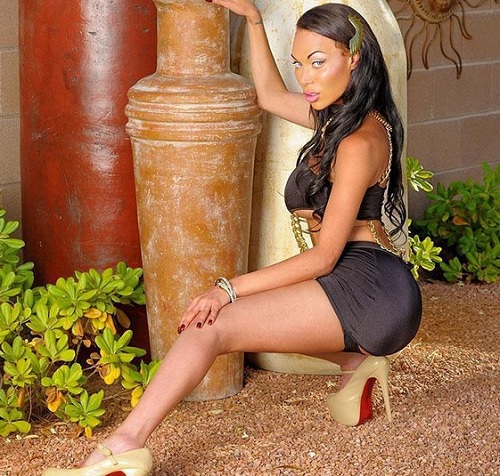 Did Tyga make a sex tape with transgender model Mia Isabella? On July 7, all hell broke loose on the internet when it was revealed that Tyga was allegedly cheating on Kylie Jenner – with Mia Isabella. Although the story does seem a little far-fetched, a blog leaked Mia and Tyga’s text messages – dating all the way back to 2013. Sure, the messages could have definitely been faked or photoshopped, but that seems highly unlikely seeing as how they included naked selfies of Tyga, with his very distinctive tattoos.

Tyga’s lawyers have been scrambling trying to clean up the cheating scandal with the transgender model. Tyga has confirmed that the naked pictures are definitely of him, but insists that he is being framed and he never sent them to his alleged transgender girlfriend. But it looks like this scandal is about to get a whole lot worse for the rapper – because now Mia Isabella is threatening to leak a sex tape that she and Tyga made together if he doesn’t pay her money he supposedly owes her for all of their booty calls. Extortion, blackmail, and prostitution are apparently totally okay – everyone is more upset with Tyga for cheating on his underage girlfriend.

Mia Isabella posted photos of her and Tyga having sex on Instagram, and they were quickly deleted and her account was suspended. Then, she proceeded to create a new Instagram page and sent out this message, “[Blac Chyna] can you or [Kylie Jenner] confirm that this is my d–k going in your man’s a–hole raw hence his nickname #TRaw – I will wait. Full video up at 12 am if I don’t have my money.”

This whole thing is getting too crazy for us to even wrap our minds around at this point. Is there really a sex tape? Did Tyga cheat on Kylie with Mia Isabella? Are the text messages fake or real? And, seriously, since when did it become acceptable to blackmail people on social media? Isn’t that a felony or something? If Tyga is being framed, who is responsible – Kris Jenner or maybe Blac Chyna? Share your thoughts and theories on this madness in the comments below!