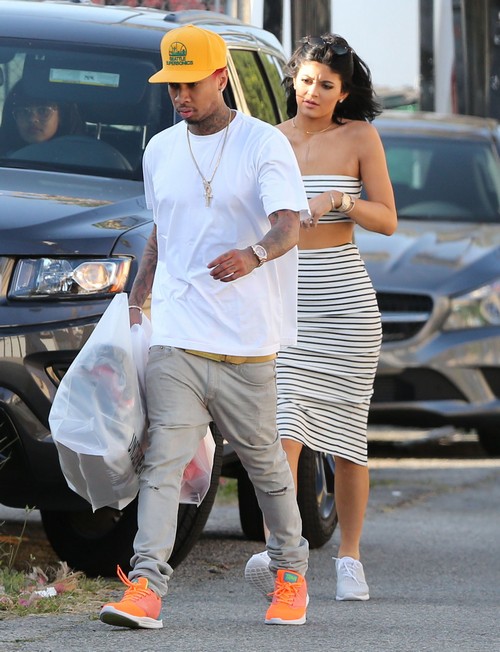 Plus, there have been several reports all claiming that Tyga wants to marry Kylie Jenner and that they want to have a baby immediately. A source tells Hollywood Life, “Tyga has strong feeling for Kylie. He can envision a future with her when the time is right. He knows he wants to spend the rest of his life with Kylie, but there doesn’t need to be a label like marriage…”

Or the TRUTH, which is that Kylie Jenner is an immature teenager who thinks that she’s in love and wants to secure Tyga. It’s her first ‘big’ love, and of course, she’s going to think it’s forever [think Justin Bieber and Selena Gomez, but more dysfunctional]. So yes, Kylie’s going to be too shortsighted to realize that Tyga could care less about who his baby mama is. I mean, look at how he cheated on his first baby mama, Blac Chyna. And now, it’s Kylie’s turn. The minute the Kardashians start their fall from fame, Tyga will go bye-bye, take his kid, and find his next jump-off. And Kylie will be sitting there crying.

And even if that doesn’t happen, Kylie Jenner getting married at such a young age would be a disaster for her image and for her future. Yes, the media will make a big deal about it, but when Kylie has to live with the burden of a child and a failed marriage for the rest of her life? Sure, the TV show will benefit for a few seasons, but years and years down the line? Kylie will probably regret not dumping Tyga or having someone bring her to her senses.