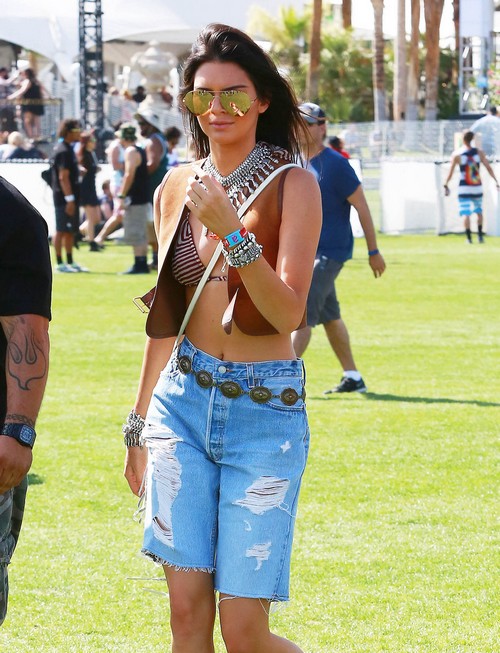 Tyler The Creator performed a set at the Coachella film festival the other day, and he decided to publicly diss Kendall Jenner? Why? Well, many think Tyler The Creator is a horrible human being and a misogynist who probably thought that he could get away with it because she’s a Kardashian.

The audience seemed to love the diss since they ended up cheering Tyler on, but Kendall had her own response waiting. She didn’t say or do anything during the set, but she tweeted a video of what happened with the caption, “Love.” She then added a picture of herself in the crowd giving Tyler the middle finger, captioning it, “… And this was Kendall’s reaction.”

Tyler did attempt to fix things by tweeting [after the show, of course], “@KendallJenner PEOPLE REALLY THINK I HATE YOU LOVE HAHAHAH.”

He made a split moment decision to hate on Kendall Jenner, and then realized the swift backlash that followed – not necessarily from the crowd or the audience at Coachella, but online. The Kardashians may be largely despised among the public, but they still have their fair share of passionate fans – and in addition to that, people hate Tyler the Creator. As we said already, he’s a disgusting performer who promotes rape and misogyny in his song lyrics, and he’s made no effort to hide his pathetic beliefs. He even waged a Twitter war against a female activist a while ago, and made her life miserable using his fan base. So really, we’re siding with Kendall Jenner on this one, even if Tyler meant the diss as a ‘joke’.

What do you guys think about Tyler the Creator dissing Kendall Jenner, and then claiming that it was a joke? Let us know your thoughts in the comments below.