BY Stormy Elizabeth on July 16, 2015 | Comments: one comment
Related : Recap, Television, TV, Under The Dome 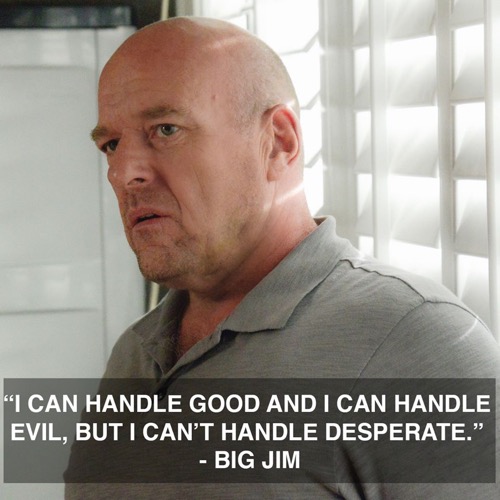 Tonight on CBS Under the Dome, based on the novel of the same name by Stephen King, returns with an all new Thursday July 16, season 3 episode 5 called, “Alaska.” We’ve got your recap down below! On tonight’s episode Big Jim [Dean Norris[ and Julia [Rachelle Lefevre] discover new information about the Dome’s capabilities, when they form a tentative alliance to discredit Christine. Meanwhile, Christine’s leadership is threatened when tensions run high in town, so she implements a plan that leads to deadly consequences.

On the last episode Under the guise of helping Chester’s Mill rebuild, Christine (Marg Helgenberger)urged the townspeople towards specific individuals and projected that remind them of their experience in the tunnels. Also, Julia and Big Jim made shocking discoveries that revealed a new threat within the Dome. Did you watch the episode? If you missed it we have a full and detailed recap, right here for you.

On tonight’s episode per the CBS synopsis “Big Jim and Julia form a tentative alliance to search for proof that will discredit Christine, which leads them to new information about the Dome’s capabilities. Meanwhile, when tensions run high in town and threaten Christine’s leadership, she puts a plan in play that has deadly consequences.”

This is definitely one episode that you don’t want to miss. Don’t forget to stay tuned to Celeb Dirty Laundry where we will be live blogging the premiere episode of season 3 Under the Dome.

#UndertheDome begins with Junior and Christine getting dressed after sex. He says it felt like being back in the other world. She smears some more cocoon goo on her and he kisses her again. She sees a purple crystal go out. She tells him she needs him to do what she asks without question. He says he knows how to follow orders and she says everything they do will be for the good of the group. They start having sex again and another purple crystal glows with bright pulsing light.

Jim takes Julia to show her something and the dog Indy is with them. She asks why Aktion is trying to kill him and he says someone has infected all of Chester’s Mill. She asks with what. He finds the video camera is gone out of its hiding spot and he says Aktion must have followed him. She asks how she can believe him and he says to help get the camera back or go the hell back. The dog hangs close to them. Barbie comes to see Eva who is happy to see him. He comes into her room.

She touches his hand and asks what Julia said after he punched the door. He say sit doesn’t matter then says she’s going crazy with conspiracy theories and thinks she and Christine are lying about who they are. He asks if Julia is wrong. Eva pauses. He pulls back from her. Eva says she can’t and he says he can’t be with soeone who’s not honest and he walks out. Huner is serving soup in town at the tent city when Joe and Norrie show up. He says they must be hungry.

He says it’s cattle feed and Norrie says it smells like burning hair. He says they were up all night working on it. Norrie says it’s amazing what people can do when they work together. Hunter glares then asks her to take over while he takes a break. She says she’s helping Joe with solar panels and that Christine asked them to get power up ASAP. Hunter says you can’t argue with Christine. Sam gets dressed after his drunken night with Abby. She asks if he’s feeling the town hall pull.

He says Christine is counting on him and kisses her then goes. Christine records that Jim compromised the power source when he destroyed the eggs and says the amethysts are losing power. She says if power to the dome goes out it will calcify and they will all suffocate. Barbie comes to confront Christine and asks who she is really then there’s a crash. The wall that Junior says wasn’t load bearing was and people are hurt. Barbie goes to help. Pete tells Christine this is her fault.

Either Junior was wrong or Pete sabotaged the wall to make it look Christine and Junior were wrong. Christine tells Barbie they have more important things to focus on and Pete says not to listen to her because she knows nothing. She says she wants to make it habitable for tonight. He says she lost the right to tell anyone what to do when she let Junior Rennie take his toy hammer to the wall. Barbie tells her that he’s got this. He goes to talk to Pete and says no hard feelings.

Barbie asks him to tell him what happened with the column so they can figure this out and they walk out together while Christine watches with suspicion. Jim and Julia rig an explosion to lure the Aktion people away from their cabin. Jim tells Indy to stay while he and Julia run for the house. Norrie and Joe lie in the field looking up at the dome and sky. They talk about surviving the town hall weirdness. Norrie says to repeat after her and she makes a pledge to look after him and he vows to look after her.

They promises to keep the freaks with glazed eyes away and she tells him to promise her that he’ll kill her if she becomes one of them. He says screw you and she tells him she loves him. Sam makes it town hall and looks at the devastation. Junior asks where he’s been and tells him he knocked out a column that was load bearing and says Christine wants Sam to help treat the injured. Christine tells Eva that Barbie is suspicious and asks what she told her.

Eva says she’s tired of leaving and tells Christine their agreement is off. Christine says she’ll tell her the truth and asks her to meet her at the caverns later and says the answers are there. Pete says Christine is a fobbit and they talk about serving in the Armed Forces. Pete was a combat engineer who knows construction. He explains he knows destructive engineering. Maybe Pete planted a tiny explosive. Julia goes looking for the camera and finds the file is empty.

She downloads some files but then someone is there. Marston holds a gun on her and says to back up but then Jim is there too and asks where the camera is. He says the file was damaged in the download. Jim says if he wants the egg he needs to give them info and Julia asks Marston what happened in Alaska. Pete tells Barbie how he got his wife back in the alternate reality then they wake and he’s in there and his wife is still off banging another guy.

They talk about Christine being the queen and how to stop her from calling the shots. Christine finds Sam treating injured people and she asks if he’s been drinking. He says so what. She says selfish decision have an effect on everyone and says if he was there on time, people wouldn’t have been standing there. He says this was not his fault, it was her and Junior. He says he slept in and is in the town drunk. She says not to walk away but he says he’s going back to Abby who accepts him as is.

Christine is losing control and isn’t happy. Marston says an archeological team found an egg and the shards emitted electrical charges when touched. He shows them a video. Marston says it was an unknown energy they’d never seen – it was clean and non-radioactive. Marston says it was game changing but then the group was infected from touching the shards and it altered their behavior. A leader walked off the roof and the others followed.

Marston says their bodies were infected with cells. Jim asks what happens if something happens to the egg. Marston says whatever the leader does, the others will follow. Julia says they know who the leader is and he says they hired anthropologist Christine Price and she had a research partner. He says there’s a treatment but it’s just in the trial stages. He thinks if they catch the infection early enough, they may be able to reverse it. Julia asks if the others are safer without the leader.

Security comes in and Marston calls them off and says they’re all friends. He tells them Julia will lead the team to Christine while Jim tells them about the location of the egg. Jim says no. Marston says he will show them how to get out of the dome once they hand over the egg. Christine goes to Abby’s house and asks if she was expecting someone else. She asks her daughter’s name and she says Courtney. She says she met her in the other world. Abby says she can still feel her in her arms.

Christine says she was born with brain damage because of her drinking and asks why she lied to the group. Abby says she can’t imagine her daughter the way she is because of her behavior. She says she likes to imagine her with new parents and doctors fixing her brain. Christine says the girl doesn’t have a chance and never did because Abby is her mother. She says it can be a relief to admit who you really are and touches her arm. Abby says she loves her daughter and Christine hugs her.

She tells Abby she destroys everything she loves. She tells Abby that she knows she cares about Sam and says the world will never get to know who Courtney would have been but says she can still save Sam. She hands her a prescription bottle and says she knows she’ll make the right choice this time. Barbie and Pete work and Barbie says to get some other guys to help but Pete says they won’t help since Christine ordered them to do something else.