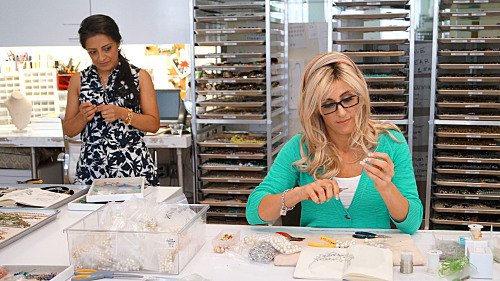 Tonight on CBS their Emmy award winning reality show, Undercover Boss continues for an all new Friday January 30, season 6 episode 8 called “Stella & Dot” and we have your weekly recap below. On tonight’s episode Jessica Herrin, CEO and Founder of Stella & Dot, a leading global direct sales company with its own boutique-style jewelry and accessories line, goes on an undercover journey to discover the real gems working within her company.

On the last episode, Rick Forman, Founder and CEO of Forman Mills Inc., one of the fastest-growing discount clothing outlets in the country, discovered some defects in his organization. While undercover, Forman grew frustrated by the antiquated cash registers and price check systems that continued to slow his stores’ productivity levels, and he exasperated his employees with his haphazard work style. Did you watch the last episode? If you missed it, we have a full and detailed recap right here for you.

On tonight’s episode as per the CBS synopsis, “Jessica Herrin, CEO and Founder of Stella & Dot, a leading global direct sales company with its own boutique-style jewelry and accessories line, goes on an undercover journey to discover the real gems working within her company. While undercover, Herrin drops the ball while learning to make one of the company’s signature items, and she is surprised to learn one employee’s true feelings towards corporate management.”

#UndercoverBoss starts now. It’s Jessica Herrin, founder of Stella & Dot. Stella & Dot has its HQ in San Francisco and design center in NYC. Jessica’s company has more than 30,000 women selling for them. They have home shows and sell in stores as well. Jessica was raised by her dad and she paid her way to Stanford and got a degree in economics. Then she founded WeddingChannel.com and dropped out of graduate school.

She says she wanted to enable women to have career and family but wanted something more than the 1950s type experiences. She started the company when she was pregnant with her daughter. She says she started the company in her living room making jewelry. She says the women who sell for her have made over $200 million in commissions. Jessica says she has set a high bar for herself. She and her hubby Chad have an eight and 10 year old.

Her kids come in wearing wigs and tell her they are undercover sisters. She says she’s proud to be a provider for her family. She gets her makeover and says she’s thinking blonde since she’s now a brunette. She also gets dark contacts and long press on nails and glasses. She comes in and her kids start laughing. The girls say “stranger danger.” She says she hopes to find out what she’s missing in her knowledge about her business.

She heads to Ohio to a distribution center to be a picker. They get an order, put it in a box and pack it for shipment. She’ll be working with Tyler. He thinks she’s really cute and he’s all giggly. She’s confused and says it’s a #BarcodeBonanza. She wears a device on her arm that tells her what products to pull and then she scans them with a little laser device on her finger. She asks if he has one large bicep from holding that thing on his arm.

He tells her he works two jobs and goes to college. He tells her that they’re going to have a race where he picks about 50 products and she has to do half that. He zips around her and jokes that she should take her time. She pulls the wrong item then has no clue what to do. He gets his done fast and she’s amazed that he’s done already. She says he was a good winner because he didn’t gloat. They then go to packing. He shows her how to do quality control.

She says Tyler is very passionate for what he does and says he has a great attention to detail. He says he goes to school at night four days a week to be a dental hygienist. He says it’s the cheapest associate’s degree with the biggest bang for your buck but says he wants to study psychology and work with addiction. He says he grew up in a bad neighborhood and says a lot of his friends were addicts and his brother struggles. He says he has learned a lot working here.

He says working there helped him be able to move out of his bad neighborhood. Jessica says he should be able to do what his passion is telling him to do. Next, she goes to NYC to work as a sample maker in the design studio. She’s working with Maria who thinks she looks like a Barbie. Maria shows her what the designer drew and says she makes it real. Maria says she puts her own ideas into things and Maria has her work with some pearls.

Maria tells her she’s been there a couple of years but then tells her to focus because she’s not doing it right. She drops two pearls on the floor then more. Maria tells her she needs more practice. She tells Jessica she’s going through a divorce and has a teenager and a five year old. She says the divorce has been hard on the kids. Jessica asks what her dream is and she says she wants a house for her kids because they each want their own room.

She says her son wants to be an architect. She says she wants to be a designer. Jessica says she thinks she has the creativity to do it. Next, Jessica goes to Des Moines as a stylist at a trunk show. She says the trunk show is the heart of the business. The stylist helps the host hold the party. She meets Grace but says she’s worried because she has met Grace before and is worried she’ll recognize her.

Grace says she tries to provide a great customer experience. She says she greets them and then she realizes that she knows who it is. It’s Jessica and Grace knows it’s her and then she gets really nervous. Jessica asks if she’s throwing her off and she says that she is.

Jessica is totally #Busted. Jessica asks her if she looks familiar and Grace is relieved that she revealed herself. She says she knew the second she sat down and Jessica tells her she’s doing Undercover Boss. Grace says she has to pretend she’s not herself and they head off to the trunk show together. Jessica says Des Moines is a great market for Stella & Dot because of Grace.

Grace gives her some ideas on what would help sales that aren’t showing well just from the Look Book. Grace tells her that she has some issues with the Executive Team. She says what she gets is that they talk about themselves and says it’s like that at Director’s Retreat and says she’s never asked her a personal question. Grace says she feels like people just want her to ask about them. She gets teary and Jessica hugs her.

She tells her that her did died when she was a teen and they talk about her a bit. Jessica says it’s harder as the company grows but she wants to reach out to people. She next goes to their Delight Center in Scottsdale, Arizona. She goes to see Jade who is a delight associate. She takes calls from customers as well as sales associates. They take a call.

Jessica takes a call and Jade says she’s talking over the woman. She tells her to pause and listen. Jade says she really understands the system and Jade says she handled it nicely. She says that she did a good job handling customers. Jade says sometimes there are escalations but says she’s good at this because she says babies and deals with hard things all the time. She has a three and five year old and is a single mom. She says there’s no time to cry about it.

She says she doesn’t want her children to grow up in a home where she’s worried and says she had to grow up fast herself and wants her kids to grow up proud of her. Jessica is really impressed with Jade’s maturity and energy. She says she can’t wait to think about ways to develop her at Stella & Dot. Jessica is getting back to herself for the #BossReveal. She sits down with her employees and they laugh when they realize who she is and what show they’re on.

She tells Grace that she’s amazing at her job. She says seeing her in action was amazing. She hands Grace a necklace personalized from her and says she’s sending her for a spa day. Jessica says she’s glad she shared with her about losing her father and says she wants her to know how much she’s appreciated. She says they’re making a $10,000 donation to a cancer foundation in her dad’s name.

Then she talks to Maria and says she’s so good at this. She tells her she’s a talented artist and will now be a sample designer. She talks then about Maria’s kids and says she found some architect classes for her son and is paying for it and then offers to cover dance lessons for her daughter. She also then talks about the kids wanting their own rooms and Jessica says that’s probably hard. She tells her that she’s going to pay her rent for a year.

She then talks to Tyler and says he was incredible at his job. She says she also talked to his managers and they told him he did something extraordinary for his coworkers – he bought them insoles because the job is on their feet. She says every year on people’s anniversaries they’ll get a new pair of shoes in his name. She also gives him $5,000. She then talks about him wanting to go to school. She says she’s going to give him $20k to help with his psychology degree. He tells her he’s going to make her proud.

She then talks to Jade, the customer service rep and says they’re giving her a promotion. She says she’s also getting a 20% raise. She says everyone appreciates her. Jessica tells Jade she’s an extraordinary mother and she also gives them an all inclusive one week trip to Disneyland. Then she also tells Jade she’s giving her $15k to help take some of the weight off of her shoulders.

Grace’s business is doing well. Maria can finally have come breathing room, Tyler is enjoying the new shoes and Jade got her kids into a better home. Meh. Jessica Herrin lives in a $6 million home and her company is set to bypass the billion dollar mark this year. She cheaped out with Grace especially and was not nearly as generous as many other bosses. She was almost as cheap as the boob job boss from Bikinis Bar.