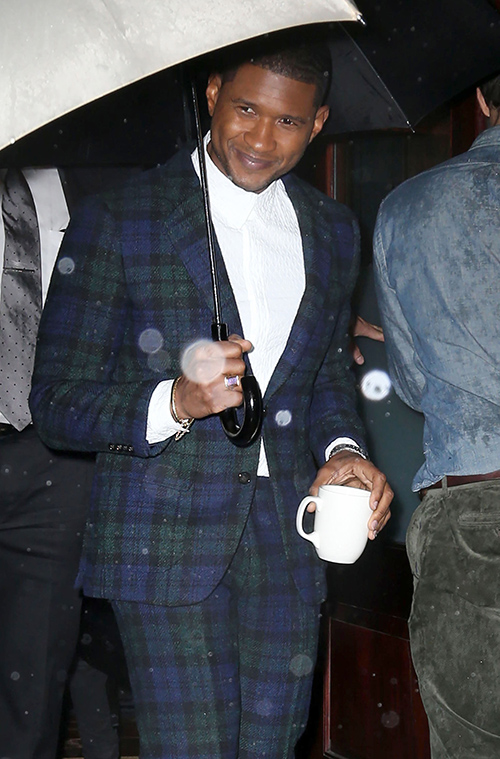 Usher Raymond has finally confirmed rumors that he married longtime girlfriend Grace Miguel in a secret Cuban wedding. Rumors of the private wedding and honeymoon have been plaguing the “U Got It Bad” singer for months and finally the singer has fessed up.

Usher was a guest on “The Ellen DeGeneres Show” on Friday, December 4th when Ellen announced, “Congratulations to you – he got married!” It was the first time since Usher’s secret summer wedding that he confirmed being married. This time the “Confessions” singer did a little confessing that didn’t get him in trouble.

“Thank you!” Usher said. “In Cuba – it was really great.” Then the “Nice & Slow” singer told Ellen DeGeneres, “You know what’s funny? We put this picture up and we were actually just in Cuba on a cultural exchange and people were like, ‘Hey, they got married.’ But you know, the ring is on the other finger, you guys. But we had a great time.”

That clears up the questions about why Usher Raymond hasn’t dropped any new music recently. The R&B singer hasn’t put out a studio album since 2012’s “Looking 4 Myself.” That should change though because Usher promised to have new music out next year. Maybe we’ll hear all about his happy marriage in the upcoming tracks.

Grace Miguel has been with Usher since 2009 and the singer has often referred to her as his soulmate. The “Good Kisser” crooner has always gushed about Miguel and it looks like nearly half a year of marriage hasn’t changed that. Usher Raymond has talked about the things he loves most about his wife and their ability to travel was at the top of his list. Usher says he is not longer rushing from one tour date to the next but now he and Grace have been exploring the world together.

The former coach from “The Voice” sounds like he’s really happily married to Grace Miguel. The 37-year old singer seems to have really grown up since some of his previous disastrous relationship like his first marriage to Tameka Foster and his ancient relationship with Rozonda “Chilli” Thomas. Will Usher and Grace Miguel last after their secret Cuban wedding or will we be hearing more confessions?