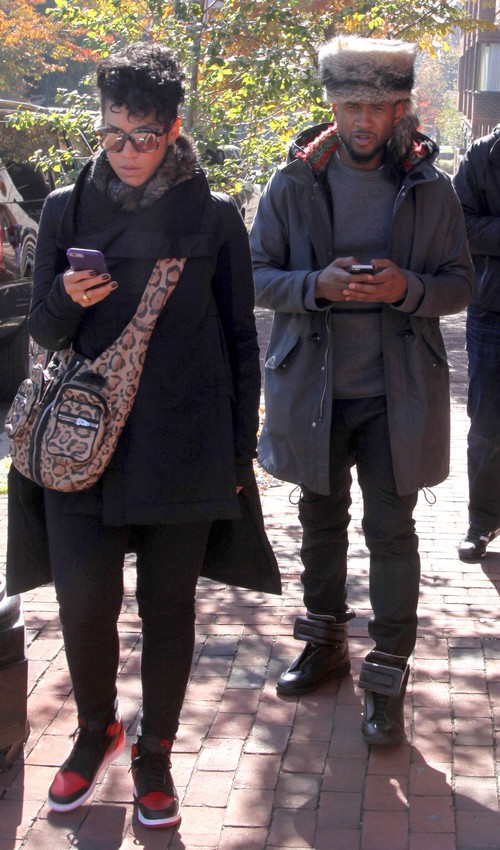 Usher Raymond’s track record shows that he likes to mix work and pleasure—once married to Tameka Raymond, who was his stylist at the time they began dating, and is now engaged to his longtime business partner Grace Miguel. Usher’s mother absolutely hated Tameka Raymond, and her take on Usher’s ex seemed to be pretty accurate. Let’s hope that Grace has the seal of approval from the family.

The couple have been together since 2009, and Grace has seen Usher through good times and bad. Usher knew she was the woman he wanted to spend the rest of his life with. After a terrible divorce following a rocky marriage to first wife Tameka, Usher was a little nervous about walking down the aisle again. Grace was patient and never put pressure on him. That made him fall even more in love with her. He loves that Grace isn’t all about the Hollywood scene, and isn’t showy in any way, say those close the Usher. He bought her a huge engagement ring that Page Six reported, “you wouldn’t think it was an engagement ring because it’s so big.”

Grace has not only been Usher’s “everything,” she has also embraced his sons, Naviyd Eli and Usher Raymond V, and watched them grow up in front of her eyes. Usher, 36, opened up to Billboard magazine only a couple months ago about Grace saying, “I have an incredible partner and manager.

She has helped me through some of the hardest times in my life and my career. She’s someone who’s been able to support and understand all of who I am. Not just as a dancer or as a performer or as a singer, but as a humanitarian and a business man and as a person.” The couple was spotted cozying up at Saturday night’s Golden Globes Art of Elysium Heaven Gala in Los Angeles where Grace showed off her huge rock.

Congratulations to Usher and Grace!